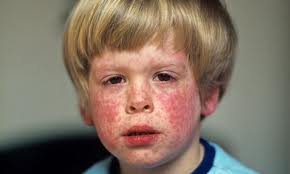 Measles is best known for causing a rash in childhood, but measles can affect other parts of the body and sometimes occurs in adults. Vaccination has significantly reduced the number of cases in the United States, although isolated outbreaks continue to occur.United States of America, in 2008, measles killed 164,000 children.

Measles is a highly infectious illness caused by a virus. The virus lives in the mucus of the nose and throat of people with this infection. Physical contact, coughing and sneezing can spread the infection. In addition, infected droplets of mucus can remain active and contagious for around two hours. This means that the virus can live outside the body – for example, on surfaces and door handles.

There are two types of measles, each caused by a different virus. Although both produce a rash and fever, they are really different diseases:

Rubeola: The rubeola virus causes “red measles,” also known as “hard measles” or just “measles.” Although most people recover without problems, rubeola can lead to pneumonia or inflammation of the brain (encephalitis).

Rubella:The rubella virus causes “German measles,” also known as “three-day measles.” This is usually a milder disease than red measles. However, this virus can cause significant birth defects if an infected pregnant woman passes the virus to her unborn child.

Measels is caused by an RNA paramyxovirus.Humans are the only nature host.The virus remains in the air in droplet form for several hours ,especially in humid weather.The infection is transferred from infected secretions of the nose,throat and the respiratory tract, during the prodromal period or the early stages of  rash (four days before and five days after the appearance of the rash).Measles affects virtually everyone in infancy or childhood between six months and three years of age in developing countries.
How can produce the disease:

Both the rubeola and rubella viruses are spread through the respiratory route. This means they are contagious through coughing and sneezing. In fact, the rubeola virus is one of the most contagious viruses known to man. As a result, it can spread rapidly in a susceptible population. Infected people carry the virus in their respiratory tract before they get sick, so they can spread the disease without being aware of it.

If people are immune to the virus (either through vaccination or by having had measles in the past), they cannot get the disease caused by that virus. For example, someone who had rubeola as a child would not be able to get the disease again. Remember that rubella and rubeola are different viruses. An infection with one of these viruses does not protect against infection with the other.

Although there is no cure for measles, there are steps that can make the disease more tolerable. These include the following:

Pain relievers and fever reducers such as acetaminophen (Tylenol, Liquiprin Drops, and other brands) and ibuprofen (Advil, Motrin and other brands) can help with symptoms when used according to directions. Remember never to give aspirin to children or teenagers because it may cause a disease known as Reye syndrome.

Because of widespread vaccination of children, both kinds of measles occur much less often than in the past.