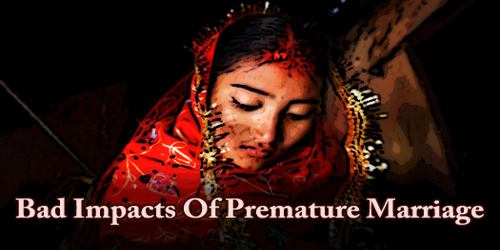 Premature marriage is a common feature in the poorer counties of the world. Bangladesh is a poor country. Here premature marriage is rampant. It means the marriage of the boys and girls before attaining their physical and mental maturity. In our country girls are the victims of premature marriage. In the existing socio-economic set up, girls are neglected from their birth. They are considered as a liability. So, when a girl child is born, it is not regarded as a happy event. Instead of being delighted, the male members think that she has come to add to their misery. So, the parents try to find a husband for her even before she attains physical and mental maturity. Obviously, there are many causes of premature marriage. First of all, Bangladesh is an agricultural country. For agricultural work, female children can’t contribute much. Secondly, poverty is an ever-present specter in our country. So, the father of a girl thinks that his burden will be less if he can marry his daughter off early. Thirdly, religious misinterpretation and social structures discourage, often prevent girls from going to co-education schools. As a result, the girls can’t receive a proper education. Fourthly, our evil dowry system is also responsible for premature marriage. Many problems are created because of premature marriage. As they are not matured, they can’t adjust with the environment of their in-laws house. They can’t serve the family. Sometimes, it so happens that if the father of the girl fails to fulfill the demand of the dowry, she is maltreated, tortured and in extreme cases killed by the husband. So, they suffer from both physically and mentally. This can’t do. A proper solution to this problem must be found out. Our govt. has already made a law. Early marriage is a punishable act. According to the law, a girl before eighteen and a boy before twenty one can’t marry. But this occurs every here. Every conscious citizen must come forward against it. Different mass media can play a vital role in this regard. They should create awareness among people about the bad effects of premature marriage. After all, parents should be very much conscious of their children. Only then, we can hope a society where there will be no premature marriage.