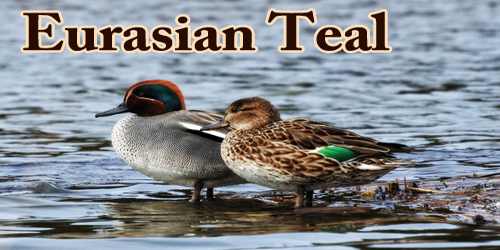 The Eurasian Teal, also known as common teal, or Eurasian green-winged teal (Anas crecca) is widespread and the smallest dabbling duck breed, found in temperate climates across Eurasia. They are sociable birds that form large flocks outside the season of breeding. Due to being the only one of these small dabbling ducks in most of its range, the Eurasian teal is sometimes called simply the teal. The bird gives its name to the blue-green color teal. Found from temperate Europe, northern China to northern Japan and winters south to Africa, Middle-east, and the Indian subcontinent, southern China, Japan, Korea, the Philippines, Indochina, the Thai-Malay Peninsula, and northern Borneo. This bird belongs to the ‘real’ teal party of dabbling ducks of small Anas, closely related to the mallard. Green-winged teal and speckled teal also appear in the party. Outside the breeding season, it is extremely gregarious and large noisy flocks are usually seen in wet areas. It breeds in sheltered freshwater wetlands with tall vegetation, but during winter, it frequents brackish waters and occurs in coastal inlets and lagoons. This species is threatened by degradation and loss of the habitat. Poisoning, hunting pressure, human disturbances, and diseases are today’s usual threats. But currently, the Eurasian Teal is not globally threatened.

The Eurasian Teals are sexually dimorphic and, depending on the season, often change plumage; the male drake has a grey body with a white line on its chest, a yellowish back, and a buff breast. Their head and neck are chestnuts, bordered with yellow-white lines, with a dark green half-crescent over their lips. Female hens have a mottled brown body, darker brown on the top of the head with a green speculum on the upper wing. Males look more similar to this in the non-breeding season. It is one of the smallest extant dabbling ducks at 34–43 cm (13–17 in) length and with an average weight of 360 g (13 oz) in drake (males) and 340 g (12 oz) in hens (females). The wings are 17.5–20.4 cm (6.9–8.0 in) long, yielding a wingspan of 53–59 cm (21–23 in). The bill measures 3.2–4 cm (1.3–1.6 in) in length, and the tarsus 2.8–3.4 cm (1.1–1.3 in). The Eurasian teal breeds across northern Eurasia and winters in the south. In the UK, there are 2,100 resident breeding pairs but have 210,000 wintering teals. Their preferred habitat is a wetland, marchland, freshwater pools, and lakes. As dabbling ducks, teals eat aquatic invertebrates, crustaceans, insects, and larvae, and in winter will prey on grasses and seeds of aquatic plants. They feed during the day when breeding but are often crepuscular in winter; wear away twilight. this can be a loud species. The male whistles cryc or creelycc, not loud but very clear and far-carrying. the feminine includes a feeble keh or neeh quack. The breeding season is from April to May, with pairs forming in winter and traveling to breeding grounds together in March. The Eurasian teal is one in every of the species to which the Agreement on the Conservation of African-Eurasian Migratory Waterbirds (AEWA) applies.