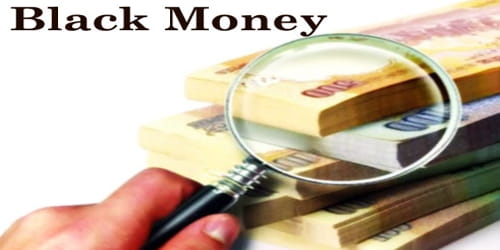 Introduction: Black money is basically the accumulation of income obtained illegally. It is not declared for tax purpose. The problem of black money is not new to our country. Money generated via various illegal sources and the attempt to hide it from the government for the purpose of tax evasion has been a common practice here. The accumulation of black money has several negative repercussions on society with the economic and social disparity being the major ones.

Sources of Black Money: Now the question remains that when there are so many negative impacts of black money then why isn’t the government taking steps to eradicate the problem? Well, the government is making efforts to free the country of black money however the sources of this ill practice are stronger than the policies imposed to get rid of it. It goes without saying that evasion of different types of taxes including the income tax, state taxes, corporation tax, excise duty, and customs duty is the key to generating black money.

Here is a look at the various other sources of black money:

Private firms also generate black money through a method called “Transfer Mispricing”. The modus operandi used in this method is to manipulate the price of the transaction between two parties, in order to deceive tax agencies and benefit both the parties. Though the money is not earned by dishonest means, it is purposely hidden from tax authorities to evade taxation and is still considered black money.

Here are some of the ways in which we can control this issue:

The exchange rates must be realistic and should reflect our comparative rates and position in the world economy.

Conclusion: The government has taken certain steps to eradicate the issue of black money. The recent and one of the major steps taken in this direction was demonetization. While this step helped in eliminating black money to some extent many people condemned it. However, even if it helped, it definitely was not enough. A lot more needs to be done in order to stop this ill practice. The government must look for more effective measures to curb this problem. And remember, the government alone cannot bring this issue to an end. It can only be curbed if each and every citizen of the country contributes his bit.