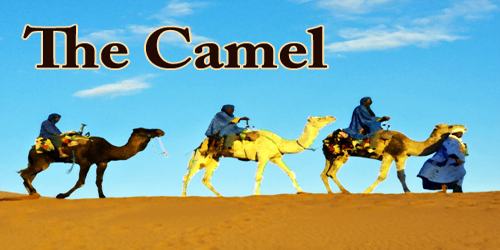 The ‘camel’ (genus Camelus) is a large animal. It has a high hump. It has very tall legs and a long neck. It has a very big bag in his stomach. It is called ‘the ship of the desert’.  The camel is a very useful animal. It is very obedient and well known for its patience. It can walk and run easily in the desert. It stores water and food in the hump. So it can stay without water and food for many days. It carries load and draws carts. It is also used for ploughing the field and drawing water. Camels have long been domesticated and, as livestock, they provide food (milk and meat) and textiles (fiber and felt from hair). Camels are working animals especially suited to their desert habitat and are a vital means of transport for passengers and cargo. There are three surviving species of camel. The one-humped dromedary makes up 94% of the world’s camel population, and the two-humped Bactrian camel makes up 6%. The Wild Bactrian camel is a separate species and is now critically endangered. The average life expectancy of a camel is 40 to 50 years. A full-grown adult dromedary camel stands 1.85 m (6 ft 1 in) at the shoulder and 2.15 m (7 ft 1 in) at the hump. Bactrian camels can be a foot taller. Camels can run at up to 65 km/h (40 mph) in short bursts and sustain speeds of up to 40 km/h (25 mph). Bactrian camels weigh 300 to 1,000 kg (660 to 2,200 lb) and dromedaries 300 to 600 kg (660 to 1,320 lb). The widening toes on a camel’s hoof provide supplemental grip for varying soil sediments. Camels are classified in the family Camelidae, which first appeared in North America 40 million years ago. South American camelids are the llama, alpaca, guanaco, and vicuña. The genera Camelus and Lama diverged 11 million years ago. By 2 million years ago (the early Pleistocene Epoch), Camelus representatives had crossed back to Asia and were present in Africa (Tanzania). During the Pleistocene Epoch (2.5 million to 11,700 years ago), camelids reached South America; North American camelid stock became extinct 10,000 years ago. The family Camelidae belongs to the order Artiodactyla, a large group of hoofed mammals.

Camel’s milk and flesh were staples of the Bedouin diet, and its hair yielded cloth for shelter and clothing; its endurance as a beast of burden and as a mount enabled the Bedouin to range far into the desert. The mobility and freedom that the camel afforded to desert Arabs helped forge their independent culture and their strong sense of self-reliance, and they celebrated the camel in their native poetic verse, the qaṣīdah, in which the nāqah (female camel) was a faithful, unwavering mount. Among these nomadic people, a man’s wealth was measured not only by the number of camels he possessed but also by their speed, stamina, and endurance. Today the camel remains an important part of some local economies, although it has been surpassed by automated forms of transportation for most tasks. Camels are still bred for their meat, milk, and hair, and, beginning in the late 20th century, the age-old sport of camel racing was revived, particularly in the countries of the Arabian Peninsula but also as far afield as Australia and the United States.