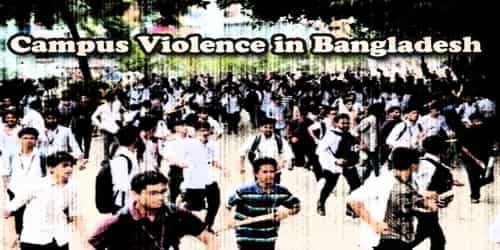 Campus violence is a common phenomenon especially occurred in educational institutions in Bangladesh. Student politics is directly or indirectly responsible for it though there are several reasons behind it. The people of the Indian subcontinent were oppressed during the British rule. At that time, students played a significant role to raise any movement against the British Dynasty. Finally dividing this Indian subcontinent into two countries, Pakistan and India, the British abandoned this subcontinent after about the two hundred year’s reign. Then the conflict took place between East and West Pakistan. Again, students came forward to raise the movement against West Pakistan. Gradually, student politics entered the campuses of educational Institutions. Till now, this malpractice is going on in full swing in the educational institutions especially at the colleges and universities of Bangladesh despite passing over about forty-two years after our liberation and causes violence now and then. The student’s wings of different political parties are engaged in rivalry. One organization wants to dominate the other organizations. As a result, they involve themselves in a clash with each other. We are not, habituated to democratic politics. In 1993, for example, The New York Times identified the Dhaka University as the ‘most violent campus in the world’. Since we are not democratic in attitude, the rival political parties want to root out one another. Then clashes and conflicts occur. The innocent victims suffer. Campus violence is also indirectly associated with the system of education and campus management. In order to avoid future dispute, the campus is closed. Session jam appears in the academic calendar. The student’s studies are greatly hampered and they suffer from disappointment. In these circumstances, it is time to take all-out steps to stop or ban student politics. If there is no politics in the campus, there will be no violence at all.