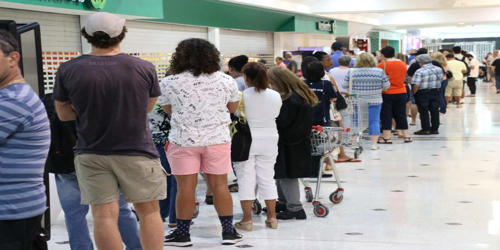 Shanti looked at the trolleys of those ahead of her in the queue. She had pushed her trolley from one end of the cashiers’ counters to the other end. There were some unmanned counters. Those manned boasted of long queues. Sighing in resignation, she mechanically pushed her trolley to one she thought was not that long. How wrong she could be! Three of the customers had heavily laden trolleys while two others had double trolleys. She was the ninth person in the line. Before she could relax, she was sandwiched when two more customers lined up behind her.

Shanti smiled sympathetically to which one responded with a casual shrug and a knowing smile. Then she heard the cashier calling out to her assistant to get the first customer’s fresh vegetables weighed and priced. A quiet voice told the cashier she would forgo those two purchases. Shanti nodded her head sagely at the lady’s understanding. After arranging all her purchases into her green bags, the customer paid for her purchases.

The next in line was very quick and left the counter with two small plastic bags. The third customer had a heavy load. She was quick in clearing her trolley of purchases and the cashier’s assistant was just as quick in repacking into the trolley after the cashier had scanned the prices.

Then it came to the fourth customer. She had a full trolley too. She was a tortoise in putting the purchases on the conveyer belt. She wanted to arrange them into different categories. She even told the assistant off for packing her things wrongly. “The customer is always right.” The flustered assistant unpacked and did not venture to continue to pack for this customer.

By the time the fifth customer was attended to, a good forty-five minutes had elapsed. The double-trolley customer did not have many purchases. She had two trolleys because she had four big cartons of can drinks plus six cartons of box drinks. The cashier just scanned the price code without taking out these things from the trolley. That saved lots of waiting time.

However, the sixth customer’s two trolleys had assorted items. She took some time laying out her purchases and the cashier had more scanning to do. All three had to work fast so as not to hold back the others in the queue. Even then the whole operation took about thirty minutes.

The seventh and eighth customers had their trolleys emptied, the goods scanned, and repacked into plastic bags. They both took about twenty minutes.

Then it came to Shanti’s turn, the ninth in line. She was searching for her member card as well as her credit card in her handbag. She had to look into three compartments before she found them. Luckily she did not leave her wallet at home. She had been guilty of such absent-mindedness in the past.

She tried to put her things on the belt but in her hurry, her butterfingers made her clumsy. She laughed nervously at herself. Fortunately, the two staff members were patient and understanding. They waited quietly. It could be they were taking a breather after clearing the trolleys of eight customers.

Shanti had her eco-green bags hanging on the trolley. The packer packed all the purchases into the bags and arranged them with the heavy ones at the base and the soft and perishable on top.

Shanti smiled her thanks at the sensible packer. She signed on the credit card printout. She took her receipt and credit card slip. She checked the receipt quickly for items and pricing.

Shanti pushed her trolley away from the counter. She was glad she did not have to queue for too long. From the time she queued up to the time she was served, it took less than two hours for her to be served. She heaved a sigh of relief that she had chosen the right queue. She noticed that some queues were quite slow.

Shanti reminded herself for the umpteenth time not to go shopping for essential goods during the weekends or public holidays. She could not do it in the early morning hours or late at night. Shanti is a career woman. Maybe she should do shopping during her Friday long lunch break. But almost everyone thinks likewise, especially career women.

Shanti consoled herself that it did not take too long, despite the long queues at almost all counters.