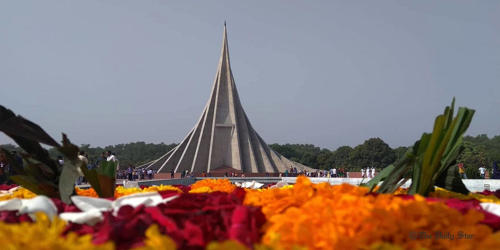 In 1947 Pakistan emerged as a Muslim state with its two wings-East and West Pakistan. During twenty-four years of Pakistani rule, the people of Bangladesh (the then East Pakistan) were oppressed, suppressed and exploited. In spite of being the majority of the population, the people of Bangladesh were deprived of their political, economic, and cultural rights. The disparity between the two wings became wider and grievances and discontentment among the Bangalees continued to grow which resulted in upsurge and mass revolution in 1969. But the Pakistani rulers tried to stop the mass revolution with the help of arms. Moreover, President General Yahia Khan refused to hand over power to the Awami League that won a landslide victory.

On March 7 in 1971, Sheikh Mujibur Rahman made a clarion call for fighting and resisting the Pakistani army as well as Pakistani rulers. On the night of the 26th March, Sheikh Mujibur Rahman was arrested and was taken to Pakistan. Just before his arrest, he declared the independence of Bangladesh. Our Freedom Fighters struggled for our country to make us free. Furthermore, they were the ones who sacrificed their lives for our country. From that night struggle and fierce fighting between Bangladesh freedom fighters and West Pakistani soldiers started. This resulted in the victory of Bangladesh through the supreme sacrifice of thirty lakhs of patriotic and valiant sons. Consequently, Bangladesh gained independence. One of the main motives for the celebration of Independence Day is to make our youth aware.

The 26th of March is celebrated as the Independence Day. This day is observed in a befitting manner every year throughout the country. To hoist the National Flag of our country and sing our National Anthem. Flags are hoisted on top of all private and public buildings. The educational institutions celebrate the day with due fervor and honor. Attractive parades and march pasts are arranged in different stadiums. Various organizations arrange seminars, symposiums to observe the day. People offer prayers in the mosques, temples, and churches for the welfare and prosperity of our country. It is on this day that every individual of the country pays tribute to them. In Schools and colleges, there is an organization of various functions. In the afternoon, many people participate in sports and games. In the evening, all the houses and buildings are illuminated with colorful lights. At night people attend cultural functions and theatrical performances arranged for the occasion.

This day helps us to realize the value of independence and sacrifice of our martyrs. It makes us aware of defending our freedom at any cost.