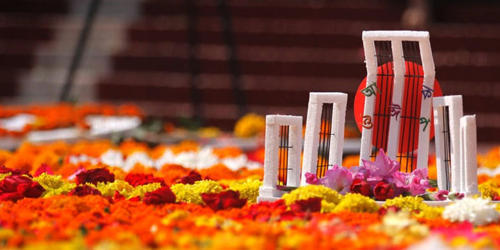 International Mother Language Day is celebrated every year on 21st February. This Day is very significant as well as a memorable day in our national history. It is, on one hand, a day of sorrow and on the other, a day of pride. The main purpose of celebrating this day is to promote the awareness of language and cultural diversity all across the world. It is a day of condolence because on this day some valiant sons of our nation laid down their lives for the demand of Bangla as a state language of the then Pakistan. On the contrary, it is a day of pride because this day has been recognized as the International Mother Language Day by UNESCO on the 17th November in 1999. This day is a symbol of protest and sacrifice to establish Bangla as the state language of Pakistan. This protest created a sense of Bangalee nationalism which ultimately paved the way to our War of Independence. Languages are the most powerful way to preserve and develop culture and to promote it all across the world.  UNESCO appreciates and encourages people to be knowledgeable about their mother language and provide them with awareness regarding the promotion of their language and culture towards other countries.

After the birth of Pakistan, the rulers of West Pakistan wanted to impose Urdu on Bengali speaking people. They tried to make Urdu as the only state language of Pakistan. But the students and the people of Bangladesh demanded that Bengali should be the state language as the majority of the population in Pakistan spoke in Bengali. At that time there were many economic, social, and cultural issues including linguistic issues. The students, as well as the people, started agitating against the decision. They called for a strike in the then East Pakistan. People responded to the call for the strike. Because of this unfortunate incident, International Mother Language Day is celebrated all over the world, while it is a public holiday in Bangladesh.

On International Mother Language Day UNESCO and other UN agencies take part in the events to promote cultural and linguistic diversity all around the world. The importance of the 21st of February is great for the people of Bangladesh. Every year this day is observed with due respect and solemnity. In the first hour of the day (that is one minute past 12 am.) the head of the state, as well as head of the government, place floral wreaths at the central Shahid Minar in Dhaka. Then the minister’s vice-chancellors of the universities, foreign diplomats, student leaders, artists, poets, pay respect to the martyrs by placing flowers and bouquets at the central Shahid Minar. The mourning procession starts from the central Shahid Minar to the graves of the martyrs at Azimpur. The prizes are given to those who made an outstanding performance in language and cultural diversity.

In Bangladesh on International, Mother Language Day people go to Shaheed Minar to pay tribute to the martyr of 21st February and sprinkle flowers on the monument. Shahid Mincers are also built-in almost all districts and educational institutions. On the 21st February, people from every corner of our country pay homage to the martyrs. This is a time for Bangladeshis to celebrate their culture, traditions, and their Bengali national language. Flags are kept half-mast as the symbol of mourning. Seminars, Symposium, recitations, dramas are held in honor and in memory of the martyrs. International Mother Language Day is celebrated in memory of the four students who were killed while fighting for their mother language and is celebrated to tell them that we will never forget their sacrifices.