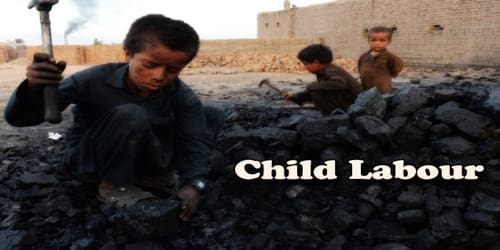 Child labor means manual labor which is forcibly imposed upon children aging from 8 to 12 years. Child labor harms the normal growth of children. Children who work hard in a factory or in a field cannot get opportunities to develop themselves physically and mentally. They are born to suffer and die in darkness. With their weak physiques, they work in shops, hotels, and restaurants. They are seen to break brick and stones. They are also found to carry brick and other building materials from one place to another. Globally the incidence of child labor decreased from 25% to 10% between 1960 and 2003, according to the World Bank. Nevertheless, the total number of child laborers remains high, with UNICEF and ILO acknowledging an estimated 168 million children aged 5-17 worldwide were involved in child labor in 2013. Asia, with its larger population, has the largest number of children employed as child labor at about 114 million. Children engaged as house servants or maidservants have to work from early morning to midnight. They are always dealt with abuse and very often they are punished mercilessly. The masters and the housewives are very harsh to them. In fact, they are not treated as human beings. Similarly, they are also ill-treated in hotels, shops, and factories. They cry they weep, even they die but cannot get the freedom to enjoy life or to go to school or find a ray of hope. They could contribute to the country if they were educated and skilled persons. The government should pay proper attention to this problem. Proper initiatives should be taken to root out this child labor problem such as giving them proper education and food, making education compulsory for children, paying allowances to the poor parents to send their children to school and so on. People, in general, should be more humane and sympathetic in their treatment towards the working children.