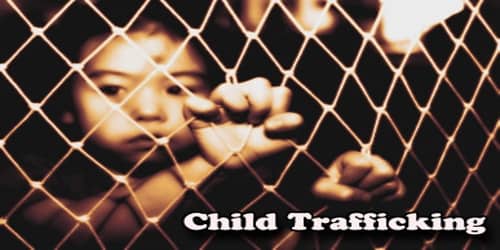 Child trafficking is a huge problem that occurs in all parts of the world. Child trafficking is child abuse. Children are recruited, moved or transported and then exploited, forced to work or sold. They are often subject to multiple forms of exploitation. The definition of “child” used here is that listed in the 1989 UN Convention on the Rights of the Child which states, “a child means every human being below the age of 18 years, unless, under the law applicable to the child, a majority is attained earlier.” The distinction outlined in this definition is important because some countries have chosen to set the “age of majority” lower than 18, thus influencing what exactly legally constitutes child trafficking. We can know about child trafficking from the media of information. Whenever we turn over the pages of the national dailies, we come across many headlines on child trafficking. The illegal traders have included children like commodities in their list. There are many reasons for child trafficking. Children are, trafficked for sexual exploitation, forced marriage, domestic servitude such as cleaning, childcare, cooking, forced labor in factories or agriculture and for making them perform criminal activities such as pickpocketing, begging, transporting drugs, selling pirated DVDs, bag theft, etc. They make the children fall into their trap and the children fall prey at their hands. The illegal traders entice and entrap an angel-like child by things like candy, apple, etc. Hundreds of parents go mad losing their sons and daughters. Again, we know the sufferings of a child after he/she has been sold. We just shudder at hearing the unbelievable, unimaginable and inhuman stories of their torture. The government should come forward with stern action against the people whose trade is to traffick the innocent children across the border.