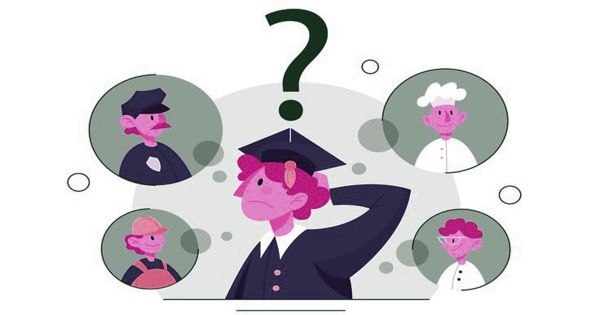 Choice of a Profession

Choice of a Profession

Choice of a profession is always difficult, the more so in the Indian subcontinent where there is a little facility for guidance. In the west, the educational system is so organized that the direction of the choice is almost decided when a young man decides the type of school to which he will g. here in India, the case is quite different. In recent times, however, some steps have been taken in this direction by requiring a student to decide whether he will take up arts or science or commerce at the high school stage. But that is only a tentative step and does not strike at the root of the problem. The student who takes up science will have to decide later whether he will be a theoretical scientist of a medical man or an engineer or a technician. An art student is bewildered with perplexity, for he does not know whether his luck will lead him into an administrative or a legal or a clerical or a teaching profession. Too often the tendency among our young men is to drift into careers that come all too easily whether through the personal backing, fortuitous circumstance or pure luck of the draw.

The government is doing something no doubt, to meet the situation by opening up a few polytechnics in big cities and in the district towns but that is only drop in ocean. The very fact that when a young man at the end of his school or college career finds all avenues of employment, either congested or blocked, he is forced, if he has some amount of courage and initiative, to take the bull by horns and not evade difficulty. He takes a loan from a bank, opens a shop or sets up some sort of machine, and builds up a career as a small businessman or as a machine man. He may go into the transport business or take to some small industry in the chemical or electrical line. Indeed there are more avenues open to a young man today that used to be the case a decade ago. What is needed these days is not luck but pluck, and fortunately our young men today have more of it than their forefathers had.

In choosing a profession, it is first necessary to consult one’s own taste. Nothing is so disastrous as to force a young man to something for which he has no liking. Let him and his guardians study his taste and aptitude, and choose the profession most suited to him. If the work is congenital, he will find it worth the trouble. In the well-equipped schools of the west, this is done by experts who study a child’s mind with the help of psychological and other tests. In a communist country, it is even easier to fit a young man in the vocation for which he shows the most capacity, for there it is the interest of the state to take from each individual the utmost that he is capable of giving. In our country, on the other hand, it is all left to chance.

Life is a big gamble, and therefore, from one’s childhood, a man is taught to believe in destiny, the luck of the lottery. Secondly, one must cease to be a romantic dreamer, and face those rugged realities of life. He must consider not only his own needs but the needs of his country. He must choose a profession that will be good both for himself and his people as a whole. He must get rid of the mentality that encourages purely selfish assumptions and unsubstantial dreams and chooses a profession with a proper understanding of all that it may involve, not simply drift into it casually or at another’s behest. He will be better able to win success, and less liable to big disappointments.

Having chosen a profession, two things are necessary. First, he must be ready to learn its secrets in a spirit of real devotion. If he wants to be a trader, let him begin from the very beginning. When he can make a hundred rupees yield profit, then only is he entitled to invest a thousand rupees in a large scheme. But to begin at once with all his resources, and then to see it dwindle into zero, – that is suicidal, though that many do.

Secondly, he must be ready to stick to the profession of his choice and struggle for it. A rolling stone gathers no moss, and a drifting worker will achieve no success. Today he studies typewriting; tomorrow he gives it up to be an agent for an insurance company. And when that also does not suit him he goes about knocking on the door to door till he finds a clerical job. He must go the hard way and adapt himself to the job he has chosen. That way success lies. Just as it is important to find a suitable job, it is equally important to suit oneself to the job finds.

“Every man is an architect of his own fortune.” Let every young man adopt this as the motto of his life. Let him find his professions and build it up like an architect, brick by brick, with patience, industry, and perseverance, and good humor. Success is not easy but with patience and determination, he is bound to succeed. Above all, let him not be driftwood, carried hither and thither by chance, by circumstances by the will of others, by everything except his own will and endeavor. Great men are self-made men.

Of course, we must not minimize the difficulties. The social outlook even in free India is gloomy. There is a hard competition. There is much profiteering at the expense of the worker: there is exploitation all around. In a capitalist economy, the underdog is always at a disadvantage. This makes a choice difficult, and success is often a gamble with a chance. Still, the choice has to be made and we must try to win the struggle.