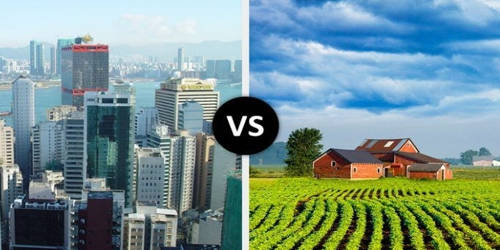 City or Countryside – an Open Speech

City or Countryside – an Open Speech

Before townships and cities developed, people lived in villages in the countryside. Facilities are, no doubt, better in cities, but city life has become associated with stress, crime, and pollution. The countryside or rural area refers to a geographical area that is located outside of towns and cities. Thus, it typically has small settlements and a lower population. A city has a large population when compared to rural areas and also have extensive systems to manage transportation, housing, sanitation, land use, and communication. Furthermore, life in the countryside is peaceful and calm whereas city life is fast-paced and busy.

Life in the city is very hectic. In the city, there is access to transport and technology. Traffic congestion is a perpetual problem. At work, fierce competition, deadlines, and meetings await the city dweller. Always in a hurry to avoid rush hour traffic jams, to be time for appointments or to stay one step ahead of others, people in cities have little time to relax. In the countryside, life is much more relaxed, there are a little hassle and no point in competing. Villagers go about their tasks during the day and rest in the evenings. The villages are beautiful and they have a nice atmosphere. People provide different opinions while choosing to live in the city or countryside. Both come up with different advantages and drawbacks as well.

Living in towns and cities is also becoming dangerous. In the city, there’re many disadvantages. There is pollution because of the exhausted fumes and factories. There’re many dark streets and it is dangerous to walk alone in the darkness. Houses in cities are fenced in and many house owners also install grilles and alarm systems to safeguard their homes. With the rising crime rate in cities, a woman walking alone at night or displaying jewelry is courting danger. In the countryside, houses may not even be locked or have fences. People there usually know one another and outsides are easily spotted. Any villager who commits a crime will be ostracized or punished, or both. Furthermore, villagers help each other.

At the same time, pollution has become a household word in cities. Exhaust fumes from motor vehicles pollute the air, and there is always the noise of the traffic. Anyone who has lived in one of the crowded housing areas in the city also knows that residents are often involuntary eavesdroppers to a neighbor’s family quarrel or are forced to listen to music from somebody else’s radio. In the countryside, houses are further apart but there is a close rapport between villagers or townspeople as they meet frequently. Furthermore, the countryside is known for its fresh air and quiet surroundings, which is good for one’s physical and mental health. The countryside, ahs, unfortunately, a few job opportunities and places for leisure. It also has an inadequate public transportation system.

If I could live in the countryside and yet have the same opportunities as I have in the city, I would definitely prefer the countryside because life there is not as stressful as that in the city and yet is much safe and healthier. The countryside is a rural area that offers you calm, quiet, and peaceful whereas the city is a developed area with a large population and many modern facilities.