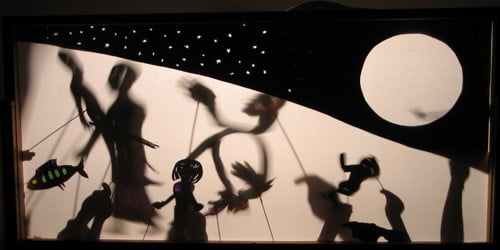 [Suppose, as a class assignment, your class has been told to write a description of local art in terms of a play or dance. You choose to write about the shadow play. You need to modify this sample according to your needs.]

The shadow puppet play is an ancient form of traditional theatre. The shadow puppet play is performed primarily as a form of entertainment in small towns and villages. In the past, it was usual for an individual or a group of villagers to erect a hut-like stage on which the puppeteer/performer performed the shadow play. The stories are told by a puppet master who manipulates the puppets which are seen in shadows projected on a screen. A talented puppeteer can make the figures appear to walk, dance, fight, nod, and laugh.

The puppeteer is a highly venerated artist who displays enormous physical and mental endurance. He is an orator who must be able to repeat many lengthy texts word for word. In addition, he has to compose and sing songs as well as direct the orchestra that accompanies him. Besides all this, he is a poet-playwright who shares new wisdom in a way that satisfies public taste.

Shadow play is popular in various cultures, among both children and adults in many countries around the world. Following customary practice, the play usually began with incantations and prayers asking for safety and help in avoiding danger.  Shadow play is an old tradition and it has a long history in Southeast Asia, especially in Indonesia, Malaysia, India, Bangladesh, Thailand, and Cambodia. However, this practice had been banned because it is not in accordance with Islamic teachings. It has been an ancient art and a living folk tradition in China, India, and Nepal. Shadow Play performances are now held solely for entertainment purposes.