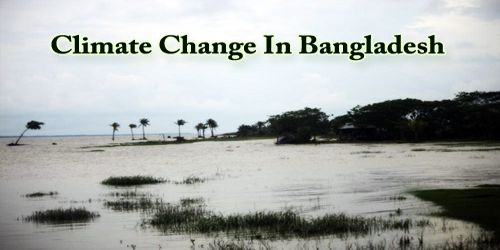 Climate Change is a change in global or regional climate patterns. It refers to the rise in average surface temperatures on Earth. Climate change is the most discussed issue in the present world and it attracts the attention of people from all walks of life in local and global levels. Environmental scientists and activists are mostly concerned about the quick changes of climate. The main cause of climate change is the burning of fossil fuels, such as oil and coal, which emit greenhouse gases into the atmosphere mostly carbon dioxide. Other human activities, such as agriculture and deforestation, also contribute to the increase of greenhouse gases that cause climate change.

Bangladesh is not immune to the adversities of climate change. Rather the country is at the high risk of natural disasters to its geographical location, low-lying landscape, the density of population, poverty, illiteracy, alternation in the pattern of seasons, poor infrastructures and so on, according to researches.

In addition, the socio-economic condition of the country is very vulnerable than in some other countries in the world. Many studies and researches have revealed the adverse effects of climate change in Bangladesh. Although Bangladesh is a developing country with an area of 1,47,570 squares kilometers, it is burdened with a huge population and 80 percent of the country is plains. Global Climate Risk Index (GCRI) 2017 prepared by the German watch highlighted that Bangladesh is the sixth disaster-prone country in the world. The report also highlighted that 0.48 people die from the adverse effects of climate change out of one lac inhabitants. In these circumstances, it is necessary to mention that Bangladesh faced 185 incidents related to climate change. For which the country had to face the losses of per unit GDP by 0.732 percent, another report says.  From the above scenario, it is observed that the effects of climate change are posing a serious problem for the country.

The climate is changing rapidly. It leaves bad impacts on developing countries. These impacts include temperature rise, greenhouse, and carbon dioxide gas emissions, irregular rainfall, salinity intrusion, rise of floods, cyclones, storm surges, and draught, etc. No doubt, these seriously affect the agriculture and livelihood of the developing countries.

However, NASA has reported that the temperature of the earth’s surface has increased by 1.1 degrees Celsius since the nineteenth century. Another report revealed that the current global average temperature is 0.85 degrees Celsius is higher than it was in the late 19th century. Data from NASA’s Gravity Recovery and Climate Experiment revealed that Antarctica lost 152 cubic kilometers of ice per year between 2002 and 2005 while Greenland lost 150 to 250 cubic kilometers of ice per year between 2002 and 2006. A report revealed that glaciers are retreating almost everywhere around the world including in the Alps, Himalayas, Andes, Rockies, Alaska, and Africa. Global sea level rose about 8 inches in the last century.

Apart from, increasing poultry and livestock farming produces a huge amount of methane gases from their wastage. Extreme and unplanned using of fertilizer in agriculture sector produces nitrous oxide emissions. Besides, fluorinated gases produce very strong warming effects which is up to 2300 times greater than carbon dioxide. Due to the adverse effects of climate change most of the countries like Bangladesh have been suffering in many ways. Natural calamities like floods, drought, cyclones, river erosion and soon have been increasing over time hampering human life and the overall economy.

To stop or to protect the country from the adverse effects of climate change, some policies can be taken such as green the community, be energy efficient, choose renewable power, eat wisely, trim wastage, fly less, let polluters pay, support and donate. Apart from, by deeply digging canals and rivers, by planting trees, by reducing fuel use, the degree of the negative impact of climate change can be reduced. In addition, everyone should be very sincere to this terrible issue and the government should be very much careful to take effective policies to combat with this challenge.