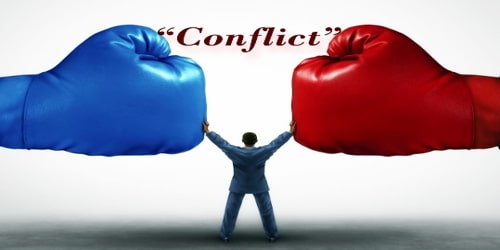 Conflict is a human phenomenon which had its origin from the very creation of human beings. The term ‘conflict’ refers to a clash or disagreement, often violent, between two opposing groups or individuals or between the two-selves of the same individual. Conflict engenders in human instinct and innate nature because of his possessing various opinions, different viewpoints likings and disliking. It is also a human tendency to hold his own belief or opinion or decision to be right and better than those of any other person or persons and hence, antagonism, hostility conflict, and even war are inevitable which destroy harmony, security, and peace in life. A conflict may have various reasons involving individual, partisan, ideological, communal, religious, moral, racial, social, political, national and international issues. An American psychologist divides conflicts into three major types arising out of three different causes, such as (a) Economic conflict (b) Value conflict and (c) Power conflict. They are further classified into four types, such as (a) Interpersonal conflict, (b) Intrapersonal conflict, (c) Intergroup conflict and (d) Intragroup conflict. Whatever causes or types may conflict have, they have mainly destructive impacts on human life and society. Uncontrolled and deliberate conflicts beget enmity, hostility, violence, war, and destruction. But inner conflict is sometimes more tragic and heart-rending than outer conflict. Hamlet’s problem ‘to be or not to be’ represents every man’s struggle within his inner selves and moderate conflicts have some positive effects developing in us a sense of tolerance realization, understanding, compromise, and capacity for reconciliation. However, it is man’s eternal quest for peace and harmony and struggle e against conflict and war.