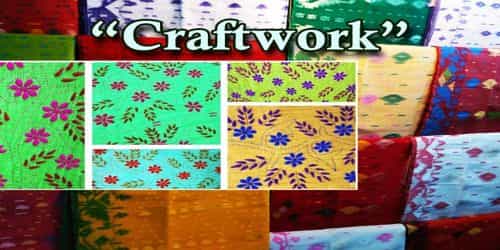 Craftwork is an applied form of art reflecting the folk-imagination and highlighting community aesthetics. Craftworks are made by unknown artists. The intimate nature of the product and the tactile feelings generated by it animate the work and we feel pride for both the product and the producer. We have a lot of craftworks. “The NakshiKantha” and the exquisite terracotta dolls of Dinajpur are the most prominent. Dinajpurian terracotta dolls being collected from village fairs have now been preserved in Bangladesh National Museum. “The NakshiKantha” is so beautifully embroidered that each stitch reflects the culture and the lifestyle of the rural people with a personal touch of the maker. Nakshikanthas are made throughout Bangladesh, but the greater Mymensingh, Jamalpur, Bogra, Rajshahi, Faridpur and Jessore areas are most famous for this craft. “Jamdani” (Bengali: জামদানি) is a fine muslin textile of Bengal, produced for centuries in South Rupshi of Narayanganj district in Bangladesh. The historic production of jamdani was patronized by imperial warrants of the Mughal emperors. In 2013, the traditional art of weaving Jamdani has declared a UNESCO Intangible Cultural Heritage of Humanity. In 2016, Bangladesh received geographical indication (GI) status for Jamdani Sari. Craftwork always pays attention to community aesthetics. It tells about the sense of taste of the people living around the region of its making. Craftwork almost remains stable fulfilling the demands of the changed scenario. Viewed from this point, craftwork is also dynamic. It is very sad that our craftworks are now going to be abolished. Craftwork producers cannot compete with the mechanically produced mass production which has captured the market for their cheap price. We must take steps to ensure the continuity of the handmade craftworks. For this, the producers need to be patronized by giving those grants, loans and other logistic support along with market facilities.