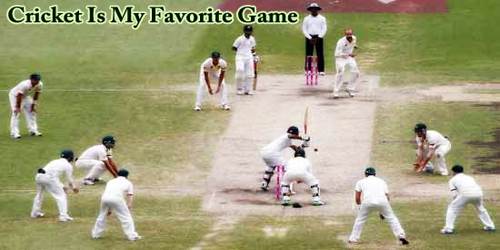 Cricket Is My Favorite Game

Cricket is an international game. It is the national game of Great Britain. But it is now played in almost every country of the world.  Cricket is an interesting outdoor game. But it is very costly. The cricket field needs heavy expenses. Other things needed for the game are two wooden bats, a ball, and two sets of stumps. It was first started in the 16th century in England and first played by Prince Edward. Then it spread over the world gradually. It is the game which is played by using a bat and a ball between two teams of 11 members each. Rules of the this game are not very complex that’s why even a child can play it. It is the most favorite game in the subcontinent. This game was introduced by the English government before independence and gradually it became part of the culture of India, Pakistan, and Bangladesh.

The game is played between two teams each of eleven players. The wickets are placed opposite at a distance of 22 yards. The team that wins the toss chooses either to bat first or to field. The batsman defends wicket against the ball bowled by a player of the opposite side. The other players of this site are put about the field to catch or stop the ball. The wicket-keeper takes his position behind the wicket. The batsman hits the ball. The batsman is bowled out when the ball hits the stumps. He is caught out when by hitting the ball he gives a catch. He is stumped out when in hitting the ball he has left his position and the ball has been thrown against the stumps before he regains his position. A batsman who places his leg or legs before the wicket against a straight ball is out L.B.W. he is run out when in making a run, the ball has been thrown against the stumps before he reaches the wicket. The side which scores more runs then the other wins the match. Generally, two innings are played in a match. There are two umpires in a cricket game. Many international matches are played each year and they are arranged and approved by ICC (international cricket council). ICC is responsible for making the rules and regulations of the cricket and to permit the teams to play on an international level. The higher degree completion is “world cup” which is held every four years between high ranked teams and hosted by a different country each time. The world cup is my favorite tournament. The game is good for health. It makes the players prompt patient and hardy. It also teaches obedience to rules and co-operation.