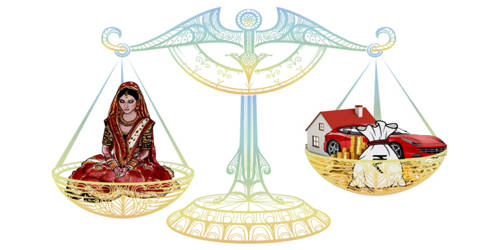 Dowry is a dreadful and unethical practice. It is a commercial transaction paid to a husband by his wife or wife’s side in return for marriage. It is a social evil which affected our society very badly. It is, in fact, an unlawful system prevailing in today’s society. There is no religious concern with this practice, but the majority of the people happily adopt it. It has become very difficult to find a suitable match for a girl without the payment of huge money as a dowry.

In the olden days, it did not prevail in society. But today, to marry off a girl for any parents cannot be imagined without it, albeit is a social and religious curse, it is difficult to remove in case of getting one’s daughter married. It is really tragic that in the progressive world of today, the evil of dowry continues to exist in all its horrid forms. In the case of educated and well-placed girls, the situation is sometimes worse. The parents of well educated and highly placed boys demand a large amount of dowry both in cash or kind. Many homes are broken and several families are driven to ruin only because they are too poor to afford a rich dowry. If their sons happen to be officers or high officials, they demand such a large amount as is called astronomical cost. No religion permits this system of dowry. Many people considered dowry as a religious obligation due to a lack of knowledge.

“Any young man, who makes dowry a condition to marriage, discredits his education and his country and dishonors womanhood” – Mahatma Gandhi.

Dowry system is a great evil that afflicts the nation in our country. It is discriminatory against women in general. It reflects the undue domination of men, gender, prejudice, and exploitation of women. In the present time dowry has become a curse sometimes it becomes difficult to quench the thirst of girl’s father-in-law. The Dowry system has ruined the lives of women and families. In case of their failure, they are burnt alive, tortured brutally, harassed, and abused to bring more and more money, jewelry, white goods, costly furniture, etc. Highly educated and well-off husbands conspire with their parents against their newly married wives and subject them to untold persecution and humiliation to have more dowry. The parents of a bride are forced to pay money, jewelry a dowry to the bridegroom and his family. The devil of the dowry is very strong and does not easily admit any defeat. It has taken a very heavy toll on female life. Dowry is a social curse. It gives nothing to society. But at present, the whole world has turned itself into a global village in terms of space and time. The immortal and vile custom has turned us all into an object of ridicule in the eyes of the civilized nations of the world. Dowry has generated corruption, terrorism, black money, greed, rapaciousness, maliciousness, other financial malpractices, and various psychological complexities. Most people condemn dowry in public but encourage or demand in private. Dowry also degrades a man to the level of beasts.

Dowry system reduces the social status of women like that of the daily commodities which can easily be bought and sold. It is too great an imprecation for poor parents to afford to bear this. For this purpose, they are to beg, borrow, take loans on the high rate of interest, indulge themselves in committing corruption or nuisance acts to manage the dowry money for their daughters. Many babies are seen killed, put into dustbins, left uncared beside the roads to get relief of the curse of dowry. The daily newspapers publish two or three incidents of dowry daily with pictures.

Dowry is not a blessing but a curse for the parents of the bride. It is a social problem and can be fought on the social level alone to eradicate this social evil from the society which has penetrated its roots deep into the soil. In order to root out the evil of dowry from society, we shall have to build up a strong public opinion against it. Proper steps against it should, of course, be taken in order that it can be erased or removed.