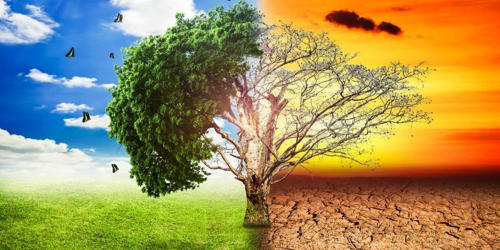 We know that the tree is our best friend on earth. It is essential for the environmental balance. It is essential for our existence. We cannot live without it. Deforestation has a long-term bad effect on our life. This disturbs our ecological balance. We also use trees as our housing material. As a result, our world is becoming tree-vacant. Cutting too many trees leads the world to the desert. The existence of birds and animals are threatened. When trees are cut down and burned or allowed to rot, their stored carbon is released into the air as carbon dioxide. Due to deforestation carbon dioxide increases. As a result, global warming occurs. And this is how deforestation and forest degradation contribute to global warming. It is responsible for the greenhouse effect.

Today due to global warming the sea level is rising and many parts of the world are going to be engulfed. On the other hand, new areas of the world are turning into deserts as an immediate effect of deforestation. For this, man’s ability to grow food is decreasing. Birds and animals are losing their habitats. Many of them have already been extinct. For too much heat, the polar ice caps will melt. Most of the parts of the world will be flooded. Thus, the world will be unfit for living. According to the best current estimate, deforestation is responsible for about 10 percent of all global warming emissions. As trees grow, they help stop climate change by removing carbon dioxide from the air, storing carbon in the trees and soil, and releasing oxygen into the atmosphere. Trees provide many benefits to us, every day.

We may face the problem of a flood, soil erosion, and drought, etc. We can take many measures to prevent deforestation. Every person should plant trees. The tree plantation program should be expanded to the remote corner of the country. The government should introduce more T.V. and radio programs on the subject of afforestation. In every vacant space, trees should be planted. More and more trees should be planted on both sides of roads and embankments. The common people should be informed of the danger of deforestation. The tree plantation campaign should be continued everywhere. Public awareness is essential to make the campaign successful. Besides, the conscious people of society can influence the common people to plant more and more trees. Both the Government and the countrymen should come forward. The more we plant trees, the more we do good for us.