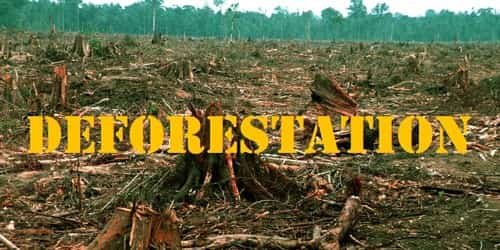 Deforestation and its Impact

Immediate effects of deforestation include the washing away of soil in the monsoon season. The first effect of deforestation is the dangerous increase in carbon dioxide which leads to the greenhouse effect. Trees give us Oxygen and absorb carbon dioxide. By destroying trees we do twofold harms. First, we destroy such friends that give us oxygen without which we cannot live a moment. Secondly, we destroy a reservoir that absorbs harmful carbon gases. There are two key issues that surround deforestation. Trees absorb CO2, helping to reduce the amount of carbon in the atmosphere. Carbon is one of the key causes of global warming and reducing these gases will help to slow and stop the greenhouse effect.

Deforestation makes the soils vulnerable. Because of deforestation soil is exposed to the sun and loses its fertility. Trees tie up the soil. When trees are cleared soil is easily washed away. Soil erosion is a dangerous consequence of deforestation. The earth is leached of minerals by the large amounts of water. The lack of vegetation also means that there will be very few animals in the area.

Deforestation causes floods and drought. One of the vital functions of forests is to absorb and store great amounts of water quickly when there are heavy rains. When forests are cut down, this regulation of the flow of water is disrupted. As a result floods and drought occur. It is important for students to understand the importance of trees and the harmful effects of deforestation. Forests are of great importance for the whole human fraternity as well as managing the natural balance in the environment.

The final and most serious effect of deforestation is climate change. Because of the increase of CFC gas, the world’s temperature is increasing. As a result, the ice in the Polar Regions is melting and the sea level is rising. Climatologists predict that if the temperature raises in such a rate some, low-lying countries like Bangladesh and Maldives may go underwater in the near future. Deforestation causes and forces the surrounding to adapt in order to survive such difficult situations.

Bangladesh has less than 0.02 hectare of forest land per person. This is one of the lowest forest and man ratios in the world. On top of that, deforestation is wiping out nearly 70,000 hectares of forest land per year. If this trend continues, forests are likely to disappear in the next 35-40 years. And if there is no forest, there will be no life. It is important for students to understand the importance of trees and the harmful effects of deforestation. Therefore, we must stop the self-killing act of deforestation and save the environment for our own safety.