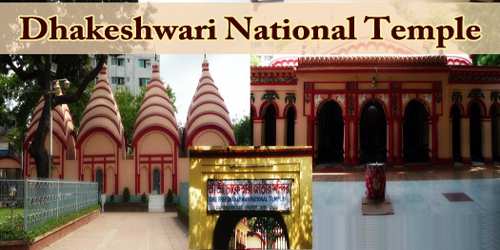 Dhakeshwari National Temple (Bengali: ঢাকেশ্বরী জাতীয় মন্দির, romanized: Ðhakeshshori Jatio Mondir) is the most prominent temple of Dhaka, Bangladesh, which is situated within a not too high boundary wall on the northern side of the Dhakeshwari Road, less than half a mile to the southwest of the Salimullah Hall of Dhaka University. There is a monumental gateway at its entrance, known as the nahabatkhana gateway. It is state-owned, giving it the distinction of being Bangladesh’s ‘National Temple’. The name “Dhakeshwari” (ঢাকেশ্বরী Ðhakeshshori) means so-called “Goddess of Dhaka”. Since the destruction of Ramna Kali Mandir in 1971 by the Pakistan Army during the Bangladesh Liberation War, the Dhakeshwari Temple has assumed status as the most important Hindu place of worship in Bangladesh. It is also the largest Hindu temple in Bangladesh. This temple is part of the famous Shakti Peethas in the Indian Subcontinent. Here the gem of sati’s crown had fallen. Popular legend connects the name of one king, Ballalsena, as its builder, but it is not certain that he is identical with the 12th century Sena king of that name. The style of architecture of the temple cannot be assigned to that period. Furthermore, sand and lime, the mortar used in the building, came to be used in Bengal after the Muslim conquest. Moreover, Abul Fazl, in his ain-i-akbari, has not mentioned anything about this temple, though he has given vivid descriptions of each and every notable object in his chapter on the survey of ten subahs. Had this temple existed in his time, it was expected that it would find mention in his survey. On the other hand, the three-domed roof and three arched entrances and the plastered walls of the temple strongly suggest that it was built in the Mughal style. Bhattasali also did not consider the sculpture of the deity to be very old. The temple was further damaged during the Muslim mob attacks of 1989–92. A significant portion of the temple land has been lost due to the Vested Property Act and confiscation by the Bangladesh Government, and the current premises are considerably smaller than the historic reach of the property.

The Dhakeshwari Temple is a hub of socio-cultural as well as a religious activity. Each year, the large celebration of Durga Puja (the most important event in the Bengali Hindu calendar) in Dhaka is held at the temple. Several thousand worshippers and onlookers (including Muslims) stream through the premises where they are offered Prasad (food – usually rice and lentils). Durga Puja comes to an end after five days, with the idols of Durga and her four children Lakshmi, Saraswati, Kartik and Ganesh taken in processions from the temple for immersion in river or sea. A Bijaya Sammelani cultural program takes place in the adjoining parade ground a few days after Durga Puja is complete, and it is also a major cultural event in the Dhaka calendar, regularly attracting some of the top performers from the Dhaka music and film industry.

The Dhakeshwari temple is a complex of several temples and ancillary buildings. The complex has an inner-quarter on the east and an outer-quarter on the west. In the inner quarter stands the main temple, the nat mandir in front of it and other structures. In the outer quarter stand a few temples, one panthaxhala, and a few rooms. On the western side, there is a large tank with north-south elongation with walking-path all around. A very old banyan tree stands on the southeastern corner of the tank. There are a few tombs of sadhus to the east of the restrooms and the tank. There are four small temples of the same size and shape on the northeastern corner of the tank, which stand one after another from east to west. Each of them is built on a high plinth and approached by a flight of steps. The stairs of the eastern-most temple is made of marble. These temples with shikhara are square in plan and their roof was constructed in six gradually receding tiers with lotus and kalasa finials on top. Each of these is entered through narrow arched openings, one each on all sides except the north. There exists a projected band on linear decoration, and in between this band and the domical roof, the walls are decorated with panels of semi-circular cusped arches. Each of the temples has a shiva linga inside. One of the most important events of the year is the Janmashthami procession which starts from Dhakeshwari temple and then proceeds through the streets of Old Dhaka; this occurs on the day of Lord Krishna’s birthday, which is also a public holiday in Bangladesh and second only to Durga Puja in importance in the Bengali calendar. In 1996, Dhakeshwari Temple was renamed Dhakeshwari Jatiya Mandir (National Temple) reflecting its position as the center of Hindu culture and worship in Bangladesh.