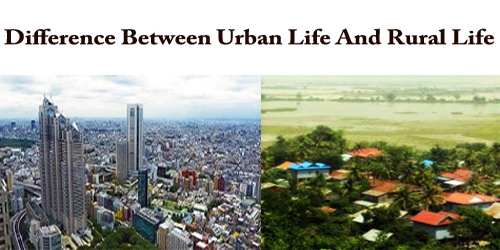 Introduction: Life in both rural and urban areas has its own plus points and problems. One is quite different from each other. Swimming, fishing, playing games in the field, running through the paddy field, drinking date juice in the winter morning can only enjoy in the village. These rare things are quietly impossible to enjoy in rural life.

The morning environment in the village is enjoyable. There are big playgrounds in the village. On the other hand, the children cannot take part well in various outdoor games due to the lack of playgrounds. Grass, grasshoppers, birds, rivers, ponds are part of life. On the other hand, traffic jams, air pollution, road accident, polluted smoke emerged from vehicles, mills, and factories, congested roads, loud sounds from vehicle horns are the daily part of rural life. People can enjoy fresh air in the village but it is rare in urban or rural areas.

Urban Life: The term urban simply refers to the region or area which is densely populated and possesses the characteristics of the man-made surroundings. The people residing in such an area, are engaged in trade, commerce or services. In this settlement, there is high scale industrialization that results in better employment opportunities. The Urban settlement is not confined to the cities only, but towns and suburbs (suburban areas) are also included in it.

There are many advantages of life in urban areas like easy access to various amenities, better transportation facilities, entertainment and education options, health facilities. Although it suffers certain drawbacks like pollution, caused due to large scale industrialization and means of transportation like buses, trains, cars and so on, leading to an increase in health problems in the people living in that area.

Rural Life: The term ‘rural’ as a region located on the outskirts. It refers to a small settlement, which is outside the boundaries of a city, commercial or industrial area. It may include, countryside areas, villages or hamlets, where there are natural vegetation and open spaces. There is a low density of the population in such an area. The primary source of income of the residents is agriculture and animal husbandry. Cottage Industries also form a chief source of income here.

A Village is a small community with Agriculture as a fundamental profession. Population density is lower hence less chaos. Rural citizens live far from technology and close to nature for they believe in its entirety. Social Solidarity or Unity is stronger than the Urbanites. Here the population is more religious, superstitious and are easily influenced in the matters of deities. Technological advancement is slower or poor.

The fundamental differences between urban and rural are discussed in the following points:

In spite of having some exceptional facilities in the village, there are some slackness of facilities like the primary, high school’s and college’s education standards. But is true that in the villages, students of these educational institutions begin their daily journey on foot but students of the rural areas go to their educational institutions daily in different kinds of motor vehicles. Besides, university standard education is rare in village areas that are available in urban areas.

In city life is very costly. People have to live with a lot of pomp and show. A simple life as in the villages is almost impossible in the city. Besides, the cities are over-crowded and it is very hard for people to get suitable accommodation. People in the city do not have much sympathy with others even with neighbors. The sympathy and close interdependence which is marked in the village’s life is entirely lacking in the city.

Conclusion: It’s our responsibility to inherit, preserve, and share traditional knowledge while striving for technological development. We should buildup the relations between urban and rural citizens emphasizing on the dignity of labor. This will not just raise the value of GDP but also sprinkles the essence of unity while learning to respect every profession for each one has its own importance. The standard of living in urban areas is higher in comparison to rural areas. At present, the maximum part of the total population resides in urban areas, as well as the total land area occupied by the urban region is greater than the rural areas.