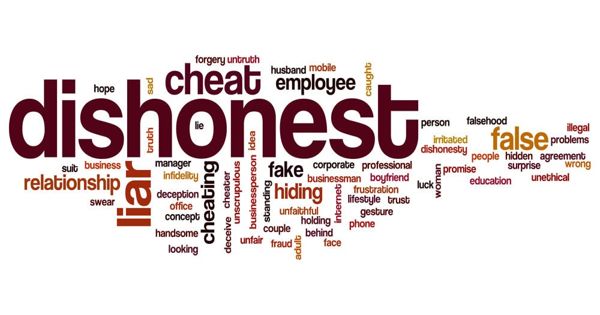 Dishonesty is the act of deceit or fraud with the intention of creating another person. This habit of dishonesty seems to be part and parcel of certain people. It is natural for us to expect blatant dishonesty in, for example, gamblers, illegal hawkers, and unlicensed taxi drivers, or even taxi drivers with licenses to be dishonest all for a few dollars. Expecting certain people to be dishonest is helpful in that we can avoid dealing with them. If we have to deal with them, we are more vigilant. One can never be too careful.

Read your e-mail or the newspaper and inevitably there are reports of cases of dishonesty. These are not reports of the dishonesty of petty traders or hawkers. These are reports of the dishonesty of professionals, people in positions where one expects them to be honest turn out to be dishonest. Throughout the history of man, we have read of cases of heads of governments, financial institutions, big conglomerates who have shown themselves to be dishonest. They misuse their positions of authority and the trust placed in them. So, dishonesty is present at all levels of society.

What about the younger generation? They are not immune to acts of dishonesty in moments of desperation. The student who wants to excel and who is not prepared to work for it may be dishonest during examinations. A young man or woman may be dishonest to the other person in their relationship. Within a family, dishonesty can also take place. This is covered up with the excuse of ‘I did not want to hurt you so I told a white lie’. The white lie is a camouflage for dishonesty.

Another type of dishonesty is scams or con jobs that promise thousands of dollars and expensive gifts. Interested parties are invited to invest in these dubious schemes for lucrative returns. They naively believe they will end up millionaires or multi-millionaires. Sad to say, many have ended up hundreds of thousands of dollars poorer. Why do these people fall into the traps of such scams? The answer here is greed – pure and simple.

Sometimes, one can be cheated by dishonesty, not through greed but carelessness, sheer laziness, or the penny wise and pound foolish habit. Helen and I had a brush with blatant dishonesty when we were looking for a house to rent. Thinking that we should save on agents’ fees, we put out an advertisement about looking for a house to rent. Within two days, a call came asking us to go to a certain address. The person claimed to be the owner of the house and was willing to rent it out to ladies only. Happily, we agreed and went to the house. A lady in her mid-thirties greeted us and showed us around the house. She was pleasant and generous enough to let us have the house fully furnished. All we had to do was to come in with our suitcases. This suited us fine as we did not want to trouble ourselves with furniture hunting. The offer was a godsend or so we thought.

It did not occur to us to inquire about where she would be staying if we take over her house. The rent she quoted was reasonable and so we paid her three months’ rental in advance and collected the keys immediately. Congratulating ourselves on our good fortune, we celebrated with a pricey dinner. The next morning, we shifted to our new place and settled in. Two days later, someone opened the front door with

a key and brought in some luggage. He demanded to know what we were doing there. Apparently, he was the owner and had not put up his house for rent. We had been cheated by this sweet pleasant lady! We lodged a police report and subsequently, the lady was detained.

Dishonesty may be pervasive but fortunately, as the saying goes, what goes around comes around and the majority of cases of dishonesty are always uncovered. You can hoodwink a few people but not the majority.