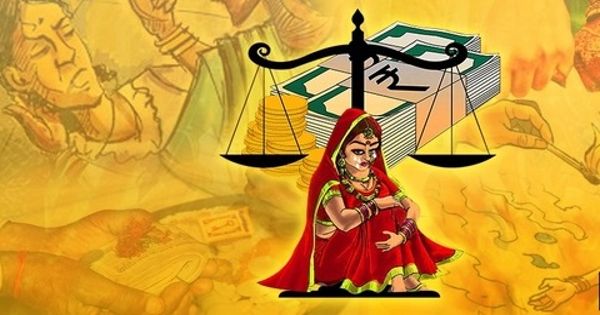 The custom of giving dowry i.e. big presentation as also cash money, at the time of the marriage of the bride is a very ancient custom. According to fundamentalists (supporters of old values and the Shastras), this dowry is nothing but the alimony or money giving at a time for the future maintenance of the bride in her Father-in-law’s house. But the reformers looked upon the dowry as a social fine. So in almost every family the girl-child, even the other day, was relegated (lowered) to a secondary position. In some of the stories of Rabindra Nath Sarat Chandra Like Dena-pawna and parinita the bride of the house is made to feel at every step that she has committed a crime of being born as a girl.

Fortunately, the attitude is undergoing a change. Yet dowry or cash is even now, when the society has far-advanced, rules the marriage settlement. Dowry or cash is now demanded in a different form. It is sometimes for furnishing the chamber of a law-practicing son-in-law or the dispensary of the physician son-in-law or to play for the outfit and expenses of his study for having handsome dowry by exerting pressure on the guardians of the bride still remains. In the lower stratum of the society, whatever may be the religion of the bride, the demand for dowry has not gone down even now.

Through sustained campaigns in literature, stage and screenplays (like “balidan” by Girish Ghosh and Mukunda Das) and also through the columns of newspapers and periodicals, frontal attacks against dowry system have been going on. What is essential is the spread of education among the girls who are the hardest hit and direct victims of his long-standing practice of dowry-taking.

Cases of untold mal-treatment of daughters-in-law in the husband’s houses often appear in newspapers. Suicides, bride-during or inhuman torture of the brides are gruesome (fearful) cases that are being daily heard in law-courts. Often severe punishments are infected. But only a few of the events of bride-torture come to light and to law-courts. For most of them are hushed up for fear of slander and public calumny.

It is an amazing state of thing that such crimes are being committed more in respectable families where the involved persons are also highly educated. The Govt. has made laws to deter (prevent) and stop this crime. Social and missionary organizations are trying hard to eradicate (to root out) the dowry system. But the net ground reality is that the practice continues almost unabated different pretexts (under cover of a false plea). An eminent man like Ishwar Chandra, Desh Bandhu inveighed (protested in loud voice) against the dowry system. In their days a few young men come forward to marry without taking a single farthing, to set an example to others. Community marriages without dowry often take place. But, strangely enough, women themselves of the groom’s house raise demands of dowry more. The best cause to remove this social scourge (curse) is for educated women to organize, oppose, and agitate against this evil practice. Instances are not wanting when some educated girls declined to marry the qualified groom since there was a demand for cash or dowry from the other side. Nowadays some grooms prefer career girls i.e. girls employed decently, to be the partners of their life. This is also some kind of dowry. For the employed girls would be forced to forego their salary meant for their father–in–law’s family. Other employed girls are forced to give up their jobs when they are married. Still, self-supporting girls have a better standing. Thus in every way social justice is not being done to the brides. Only by making laws, the system cannot be abolished. Other stronger measures, for creating the right public opinion for marriageable girls, have to be undertaken to ensure the proper status of brides and wives.