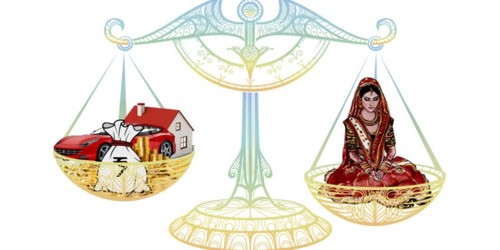 Dowry is a social curse. It was the social custom in ancient times. It means property or money, which is brought by a bride to her husband’s house at the time of marriage. It springs from the male-dominated society. The wife is inhumanly tortured and killed by her husband for dowry. Usually in our society female children are considered inferior to male children. They are thought to be of no use. So greedy people claim much money or wealth from the parents of the brides. The torture upon women by men is a very common sight of today. It is really a shame that we are approaching a grim chapter of modern civilization. Let us raise our voice strongly to establish a dowry-free, happy and peaceable society. The Dowry system affects not only a particular family but also affects the whole society.

In this subcontinent more or less every family faces this snake. The bridegroom takes dowry and the womenfolk become victims of dowry. The poor and illiterate girls mainly become victims of dowry. If the guardians fail to fulfill the demand of the bridegrooms, they misbehave with their wives. As a result, many of them get divorced or commit suicide or are killed by their husbands. On the other hand, the bridegroom gets the huge property without any efforts. A section of male members of society thinks that taking dowry is their right. We should develop public awareness to eradicate the evil practice of dowry at first. This social curse can be eliminated by making womenfolk educated and self-dependent. Besides, our girls should be properly educated and employed. The need for women education and employment of educated women should be stressed.

A movement against this system should declare right now. To save women from the curse of dowry system is a burning issue. This system has affected our whole society. I am dead against this evil system. It should be uprooted from the society. We can do postering, canvassing and make advertisements against this dowry system. The government should take strict legal measures against the person who take dowry. We cannot get rid of this social vice by taking social reformative works urgently. Social awareness should be created among all the people of society. An anti-dowry campaign should be started and people should be made aware of the evils of dowry. By developing the mentality of our citizens, we can get rid of this system.