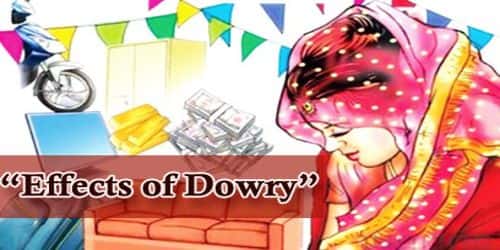 “Dowry” means property or money brought by a bride to her husband when they get married. Locally, dowry is called dahej in Hindi, varadhachanai in Tamil, jehaz in Urdu and Arabic, joutuk in Bengali, jiazhuang in Mandarin, çeyiz in Turkish, dot in French, daijo in Nepali, and in various parts of Africa as serotwana, idana, saduquat, or mugtaf. Nowadays, the system of giving and taking dowry in marriage has struck deeper roots in Bangladesh. Illiteracy, poverty, and greed of the bridegroom are the main causes of this heinous system. In Bangladesh, this is seen to be a major problem. Between 0.6 and 2.8 brides per year per 100,000 women are reported to die because of dowry-related violence. In the society of Bangladesh, this system is treated as a serious curse. Wife is inhumanly tortured, and killed by her husband for dowry. Most of the parents are poor. They cannot keep their word they give before marrying their daughters off. This leads to chaos and hellish unhappiness. Laws prohibiting dowry in Bangladesh include the Dowry Prohibition Act, 1980; Dowry Prohibition (Amendment) Ordinance, 1982; and Dowry Prohibition (Amendment) Ordinance, 1986. However, the first thing to be done to stop this malpractice is to raise awareness among all. The movement against the dowry system should be started from right now. We can get rid of this social vice by taking social reformative work urgently. With this end in view, we have to make people aware of the importance of education. Education and self-reliance of women can make them get rid of the curse of dowry. An educated woman can develop her personality and thus can command respect from her family and society. So, first of all, we have to educate our womenfolk and at the same time, we must launch campaigns against this malpractice. Thus, we can get rid of the curse of this social malady.