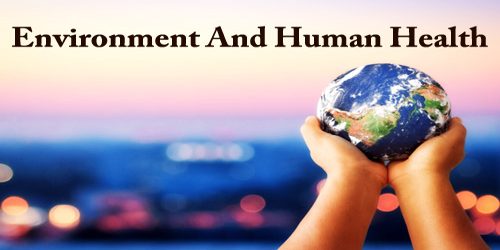 Introduction: Human health or human well-being is affected by two main factors individual traits or internal factors and ecological well-being or external factors. However, most of the time, when research is conducted on the human health condition, these two factors are investigated in isolation from each other. If one truly wants to answer the question of how does the environment affects individual health one has to look at both factors in tandem. This becomes especially important now in light of climate change warnings and governmental indifference to them.

In other words, what we do to the planet, we do to ourselves. Pollutants reach humans through the food we eat, the water we drink, and the air we breathe and endanger our health in both immediate and long-lasting ways. Outdoor air pollution alone is associated with more than one million deaths and countless illnesses each year across the globe. Children and the elderly the most vulnerable members of our society are especially susceptible to toxins like mercury and pesticides.

Unhealthy Environment Unhealthy Life: A report jointly published by the United Nations Environment Program, the WHO, the Montreal Protocol on substances that deplete the ozone layer, the Convention on Biological Diversity and the Stockholm, Rotterdam and Basel conventions states that in the year 2012 alone, approximately 12.6 million people lost their lives due to conditions brought on by environmental pollution. UNEP also estimates that environmental degradation is behind 25 percent of all human diseases.

How Environment Affects Human Health: Since we are completely dependent on the environment to survive, it is safe to say that any changes to the environment will impact human well-being. However, the actual relationship between these two is more complex than we believed and isn’t always easy to assess. The most obvious impacts that we have seen are from deteriorating water quality, air pollution, and unsanitary conditions. Radiation poisoning too has deadly consequences for human health.

Pesticides and other chemicals used in food production don’t disappear when they hit the store shelves: they go directly into the food we eat. Not only do these modern additives degrade the soil quality of our farmland and harm the pollinators that help grow our food, but they can also lead to cancer and antibiotic resistance in the people who eat them. Of the more than 80,000 chemicals currently used in the United States, most haven’t been adequately tested for their effects on human health.

The human body is mostly water up to 70% water, in fact. Add that to the reality that only 2.5% of the water on the planet is drinkable and it becomes clear why protecting our water supply is so important. Although the Clean Water and Safe Drinking Water Acts are meant to keep toxins out of our water, many still slip by both our policy safeguards and our physical filtration systems. Currently, many of the protections America put in place to ensure clean, safe water is under threat. Fracking for natural gas, which has contaminated groundwater, has led to health problems in communities where those resources are being extracted. Polluted runoff from cities and farms flows into the rivers we draw much of our drinking water from and ends up in our bodies.

Motor vehicle and industrial emissions impact human health too, as these sources contain dangerous pollutants like mercury and sulfur dioxide. The American Lung Association found that too many Americans live in areas that have unhealthy levels of air pollution and are at risk of illnesses like lung and heart disease, cancer, and asthma. Rising global temperatures from climate change worsen pollution. Indoor air can be dangerous as well, given the presence of chemicals from building materials, household products, and mold.

The corporate world is also trying to lessen its carbon footprint and turning to ‘green’ solutions. However, there are many concerns that have yet to be addressed and are spiraling out of control such as biodiversity; on average, one species dies out every day. In addition, it is becoming increasingly difficult to maintain a proper supply of food so that the world doesn’t starve.

Mental Health: Increasingly, studies conducted on mental health are relating to good mental health with exposure to nature. These studies have linked the reduction of the symptoms of anxiety and depression and lowered stress levels to the presence of green space close by. In fact, people who moved to urban areas that are greener were seen to have improved mental health.

Approach to Resolution: There are several areas of immediate concern, based on the connection between poor human health and environmental degradation.

Some of them are:

Conclusion: We can limit our exposure to toxins as much as possible on the individual level by eating organic food, avoiding places and times of heavy air pollution, and getting our water tested for dangerous metals and chemicals. But more importantly, we need advocates who will stop pollution at its source. Earth Share member organizations are doing just that, by speaking out for cleaner energy and transportation options, researching the chemicals applied in our food system and preserving the purity of our waterways. We are simply too well-woven into our surroundings to be immune to the effects of any changes in those surroundings. The problem is that because the relationship between health and environment is complex, we aren’t motivated to make major changes; we’re waiting for irrefutable evidence. By the time we do get it, it might be too late.