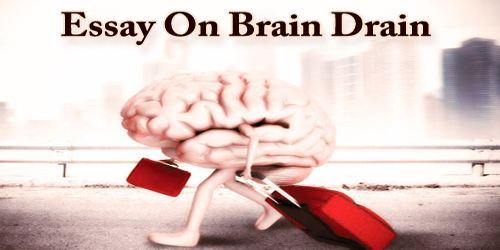 Introduction: Brain drain is the emigration of highly educated and skilled professionals in search of higher income and a better standard of living, among a host of other reasons, from the developing countries (Africa, South-East Asia countries, etc) to the developed one (United States, United Kingdom, Germany, Australia, etc.). According to a UN definition, the flight of talent that is required for a country’s development to another country is called brain drain. We have been experiencing this problem ever since we won out freedom. It was with great effort and high hopes that we set up our institutes of higher education. It is unfortunate that thousands of our doctors and engineers are leaving the country every year. More recently, the malady has affected the field of oil exploration, nuclear energy and agriculture also.

Moreover, Brain Drain shows the net loss for the sending country. One reason for Brain Drain could be turmoil within a nation. Another reason could be better pay in other countries/organizations. Most noteworthy, Brain Drain is the mass departure of individuals of talents and skills from a country.

Geographical Brain Drain – This refers to the emigration of individuals of high-skills and high-brilliance to other nations. Furthermore, this departure takes place in search of better-paying jobs. Also, these better-paying jobs will lead to a higher standard of living. Most noteworthy, geographical Brain Drain creates a negative impact on the home country’s economic development.

Problems and Solutions: The problem of brain drain has some of its roots in the unwise development plans we have been adopting since Independence. Much -reform and initiative was necessary to support India’s -development; but since they were not available adequately or coordinated efficiently, their output has not been as useful as desired. Our policy makers increased the opportunities for higher learning several fold in the early decades of nationhood, but failed to give sufficient thrust for social development necessary to provide gainful employment to the output from universities. Hence, owing to the poor state of development in the different social arenas, the trained and skilled manpower which came out of our higher education system could not be optimally utilized. The consequent mismatch between supply of educated and trained people and the demand for them in developmental activity was responsible for the decision of many to leave the country in search of education or employment.

Brain drain phenomenon is closely related to the agglomeration, a situation in which the population is centralized in the urban area because of the people are looking for a more promising condition. One of the differences between brain drain and agglomeration is that the agglomeration occurs in only one country, whereas the brain drain is happening around the world involving many countries.

However, it would not be entirely correct to suggest that developmental activity was inadequate and fragile, so that educated people could not offer their services to society. In a way, the opposite was true. Every sector of human activity was yearning for development, and, therefore, was looking for advice and expertise. In fact, many sectors, particularly those of human welfare and infrastructure, had to be built up virtually from scratch to make them contribute to the overall development process. Therefore, more than the lack of opportunities for service, it was the lack of motivation of educated individuals to serve society that was actually responsible for the phenomenon of ‘brain drain’.

The problem of brain drain is regally very serious and multidimensional. It cannot be solved with half-hearted measures and efforts. It has to be checked on two fronts. We should stop the outflow of our scientists, technicians, doctors, etc. by creating attractive, satisfying and meaningful job opportunities in the country. We should also create such conditions as may facilitate the return of those who have settled abroad.

The main reason of why educated workers emigrate is simply because there is more opportunities to attain a better life in the host countries. Scarcity of jobs in their home countries encourage them to move and work abroad, and also the higher income that they can get in host countries.

Our country is bound to become a major world and industrial power sooner rather than later. The opening up of its economy and liberalization of industrial and technological sectors will make it one of the most industrialized and scientifically advanced nations of the world. The multinational companies, foreign institutional investors and others are parking their huge funds in our country. Consequently, the number of positions in industry, finance, science, technology, computer software, medicine, etc. are increasing considerably. And so, now each and every scientist, doctor, engineer, scientist, technologist and technician can take part in this noble task of taking the country forward. Our country is already a power to be reckoned with and soon there will be sufficient opportunities for our gifted and talented professionals and young men and women. Several studies indicate that this brain drain phenomenon has become a common trend in the developing countries.

Education is one of the most important factor to improve the human capital. But as we know earlier, education has positive relation with the brain drain phenomenon. It means that the higher level of education that the workers achieved, the higher tendency of the workers to emigrate to more prosperous countries. Beside the disadvantages, brain drain can also bring advantages to force the economic growth of the home countries. The advantages of the brain drain phenomenon are the international networking, the decreasing of unemployment level, the improving quality of human resources, the optimization of production capacity in the home countries, and the availability of alternate investment resources.

Conclusion: Thus, this brain drain is and will continue unless we put a stopper by providing them with more working facilities at home and give them more than the other ordinary brains in terms of pecuniary benefits. As long as we can’t do this for them or don’t do this for them the brain drain cannot be stopped and the best of Indians will continue to find homes abroad. While they continue to go out we will have to continue being happy with the fact that they have at least become a force to reckon with, and they get a lot of name and fame.