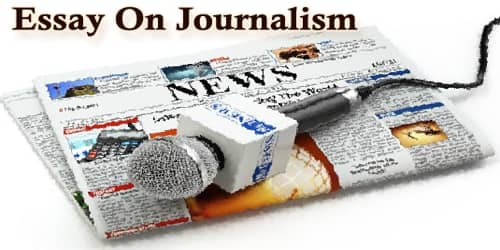 Introduction: ‘Journalism’ means the works of a journalist regarding news, views, reports, etc. It is apparent writing on any issue of an affair. The word journalism was originally applied to the reportage of current events in printed form, specifically newspapers, but with the advent of radio, television, and the Internet in the 20th century the use of the term broadened to include all printed and electronic communication dealing with current affairs.

Concepts of the appropriate role for journalism vary between countries. In some nations, the news media are controlled by government intervention and are not fully independent. In others, the news media are independent of the government but instead operate as private industry motivated by profit. In addition to the varying nature of how media organizations are run and funded, countries may have differing implementations of laws handling the freedom of speech and libel cases.

History and Professionalism of Journalism: While publications reporting the news to the general public in a standardized fashion only began to appear in the 17th century and later, governments as early as the Han dynasty China made use of regularly published news bulletins. Similar publications were established in the Republic of Venice in the 16th century. These bulletins, however, were intended only for government officials, and thus were not journalistic news publications in the modern sense of the term. England took the publication of newspapers towards the end of the 16th century. The daily newspaper sponsored by Defoe appeared at the beginning of the 18th century.

The modern newspapers really developed with the invention of the telegraph which made the possible swift transmission of news across the world. Reuter, the famous News Agency, started the work first. There are several forms of journalism with diverse audiences. Thus, journalism is said to serve the role of a “fourth estate”, acting as a watchdog on the workings of the government. A single publication (such as a newspaper) contains many forms of journalism, each of which may be presented in different formats. Each section of a newspaper, magazine, or website may cater to a different audience.

Journalism in the 20th century was marked by a growing sense of professionalism. There were four important factors in this trend:

(1) the increasing organization of working journalists,

(3) a growing literature dealing with the history, problems, and techniques of mass communication, and

(4) an increasing sense of social responsibility on the part of journalists.

By the late 20th century, studies showed that journalists as a group were generally idealistic about their role in bringing the facts to the public in an impartial manner. Various societies of journalists issued statements of ethics, of which that of the American Society of Newspaper Editors is perhaps best known.

Functions of Journalism: A modern newspaper is something very much more than a mere purveyor of the news; it is also a store-house of current information, an instrument of public criticism, a creator of public opinion. It is, indeed, a potpourri (admixture) of many things in a variety box. It has, therefore, to be served by a large and varied staff. There are the editor and his assistants who write leading articles and editorial comments and edit news.

Their influence on forming a public opinion is very great. They may be said to do political thoughts on behalf of the man in the street. Then there is the news-editor and his staff. They receive news from different agencies, staff reporters and correspondents. They edit, arrange, and display them. They can flash a headline and create a sensation. The staff-reporters interview people elicit views by “scooping” news in advance.

A modern newspaper must also have on its staff competent artists, cartoonists, photographers, etc. There must be advertisement managers and circulation managers. All these people who are on the staff of a newspaper are known by the general name of journalists, or newspapermen.

Codes of Ethics in Journalism: There are over 242 codes of ethics in journalism that vary across various regions of the world. The codes of ethics are created through an interaction of different groups of people such as the public and journalists themselves. Most of the codes of ethics serve as a representation of the economic and political beliefs of the society where the code was written. Despite the fact that there are a variety of codes of ethics, some of the core elements present in all codes are: remaining objective, providing the truth, and being honest.

The Role of Journalist: Journalism has improved much of its methods with the passage of years. “It is no longer ponderous instructive, formal. “A good journalist creates his own peculiar style. He knows the art of creating the taste and demand for what he offers. One aspires to literary excellence; another sets greater store by propaganda.

The reader is drawn to the style which is attractive to himself. So it comes about that every journal has its own set of readers. That is why a daily paper and the particular columnists are so much in demand. Too much of the opinion station has, however, to be avoided.

Present-Day Journalism: Although the core of journalism has always been the news, the latter word has acquired so many secondary meanings that the term “hard news” gained currency to distinguish items of definite news value from others of marginal significance. This was largely a consequence of the advent of radio and television reporting, which brought news bulletins to the public with a speed that the press could not hope to match. To hold their audience, newspapers provided increasing quantities of interpretive material articles on the background of the news, personality sketches, and columns of timely comments by writers skilled in presenting an opinion in a readable form.

Modern journalism is organized on a commercial scale. There are international news agencies which collect and broadcast news all over the world. Wealthy and influential newspapers always maintain their own correspondents, home and abroad. The modern world could not exist without such an elaborate organization and agency of information gathered from various sources.

Conclusion: Journalism has many competitors today. Chief of all is the radio and the televisions which not only broadcast and televises but have the added advantages of arranging talks of prominent leaders of the society and establish visual contact with them. But they cannot supersede the newspaper. Remaining glued to Radio or TV at a precise time is not always possible.

Besides, coverage of news by the radio and TV is limited; items must be cut down to the minimum so that the time-limit is not exceeded. But a newspaper can be read at any time, suiting one’s convenience. Its coverage is very wide, and its scope for improvement is unlimited. But the journalist should guard against the present tendency for trivializing and fragmenting news items, imposing the editor’s opinions upon readers.