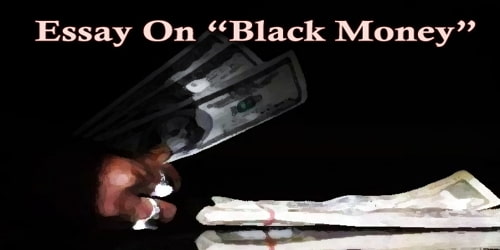 Introduction: ‘Black Money’ means a kind of money earned in an illegal way. It also refers to various types of unaccounted money earned or gained due to tax evasion graft, smuggling, non-payment of legal taxes and misconduct of business, trade, and commerce, earning money in a most dishonest way is black money. Recipients of black money must hide it, spend it only in the underground economy, or attempt to give it the appearance of legitimacy through money laundering.

Black money could arise broadly due to two possible reasons. The first is that the money may have been generated through illegitimate activities not permissible under the law, like crime, drug trade, terrorism, and corruption, all of which are punishable under the legal framework of the state. The second and perhaps more likely reason is that the wealth may have been generated and accumulated by failing to pay the dues to the public exchequer in one form or another. In this case, the activities undertaken by the perpetrator could be legitimate and otherwise permissible under the law of the land but s/he has failed to report the income so generated, or comply with the tax requirements, or pay the dues to the public exchequer, thereby converting such income into black money.

Sources of Black Money: The most common source of black money is illegal means through the black market or underground economy, such as drug trafficking; weapons trading; terrorism; prostitution; selling counterfeit or stolen goods, such as credit cards; or selling pirated versions of copyrighted items, such as software and musical recordings.

There are some sources of black money in the country. Illegal income earning from the sale commodities is one of the sources because the prices are beyond the govt. Controlled prices to gain from the sale of goods in a volume always exceeds the govt. quotas and regulations with respect to these goods.

The black money results from man’s tendency to earning more, enjoying a luxurious life, building high rising buildings and rapaciousness. The living standard in western countries is high. The rich Bangladeshis and middle income-generating people intend to cope up with them and as a result, they strive hard to increase their income by any means.

It is easy to meet up human needs but there is no way to satisfy their greed. Everyone under the sun wishes to be happy and prosperous by hook or by crook. On the other hand, the taxation structure does not favor the businessmen and the corporate sectors as well.

Political uncertainty, election, clemency in dealing with the offenders and corrupted govt. officials perpetuate the causes which lead to the generation of black money. The ordinary and common people are unaware of income taxes, laws and the procedures of saving Income tax while the rich and the shrewd tax payees are quite able to judge the loopholes through the income tax specialists/experts who are paid well by them. The govt. officials, accountants, CAs, businessmen, and anti-social elements join hands and devise efficient ways of evading taxes.

Causes and Problem of Black Money: ‘Black money’ causes the financial health of a nation to be underestimated. As it is almost impossible to estimate the amount of black money in any economy, unreported earnings cannot be included in a country’s gross domestic product (GDP). Thus, a nation’s estimates of savings, consumption, and other macroeconomic variables would be misleading, with the inaccuracies adversely affecting planning and policymaking.

Black money is both an economic and social problem. In the latter con­text, it is perceived as a problem with adverse sociological effects on society, like social inequalities, social deprivations, etc.; in the former con­text, it is perceived as a parallel economy, an underground economy or an unofficial economy that is the consequence of the economic policies of the government and has damaging effects on country’s economy and na­tion’s planning development.

So when citizens decide to evade taxation, the government and subsequently the nation as a whole that benefits (and also requires) from the developmental work, lose out because some people decided to be greedy.

As black money increases the tax income of govt. decreases. As funds or incomes of govt. falls short govt. has to raise prices of commodities and increase the tax rate so people have to pay more and their savings reduce. As savings are reduced their investment reduces as a result growth is hindered.

Hindrances to development: Black money is one of the hindrances to our national income. It is a stumbling block to the process of economic reformation. It extremely affects the social, economic, cultural and political systems of the country. It is a giant barrier towards the healthy and overall development of the nation.

The black money earner is a national enemy. Greed always deviates man from the path of honesty and truth. It makes a man unpatriotic or a traitor. The black money earners are held in very high esteem in society but they have no morality, human virtue, the room in heaven, etc.

Nature of Black Money and its Influence: Black money is not black in color; it means money that is earned through cheating overlooking one’s right dues and misappropriating others.

Black money has influence over many things. A black money earner does not care anybody for anything. He takes challenges on his neighbors over anything. He is ready to do anything in any way. He pays no respect to anyone in any case. To him, his neighbor is a worshiping character.

Conclusion: In simple words, Black money is the money that is hidden and Earned illegally. It tells extremely about the economic development of the country. So, we should abstain from such crime as can destroy society like cancer.