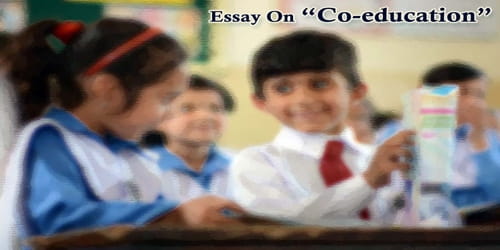 Introduction: ‘Co-education’ (abbreviated to co-ed or coed), also known as mixed-gender/sex education, means the education of boys and girls in the same educational institution and at the same time. In the primary stage, co-education has been the rule in all countries. In the university also, it is nowadays the rule almost everywhere. It is also felt that university students who have attained age and developed intelligence and a proper sense of their duties and responsibilities should be treated as matured and responsible citizens.

This method of education even though is becoming common all over the world, as there are still few parts of the country who sometimes feel, segregation is for the betterment of the learning process.

Gender discrimination is an outrageous atrocity that was and is still prevalent in a few countries. Though this is a common debatable topic, its time we need to change our opinions on such factors. Other few factors help us get rid of these outdated thinking.

In ancient times, Greece was the only country that allowed coeducation. But as time passed by, most of the countries in the world have adopted coeducation into their systems. In the late 19th and early 20th centuries, coeducation grew much more widely accepted. In Great Britain, Germany, and the Soviet Union, the education of girls and boys in the same classes became an approved practice. The reason why coeducation is important is that it awakens the spirit of equality and comradeship among all students without any discrimination. By the end of the 19th century, 70 percent of American colleges were coeducational. In the second half of the 20th century, many institutions of higher learning that had been exclusively for persons of one sex became coeducational.

Since World War II, coeducation has been adopted in many developing countries; China and Cuba are outstanding examples. There are many other countries, however, where social conditioning and religious sanctions have limited its success. In most Arab countries, for example, girls tend to drop out of coeducational schools at the age of puberty.

Problems and Effect’s of Co-education: The problem of co-education in the second stage was in the past a debatable subject. At this stage students are in their adolescence; free mixing between the sexes in this period of life, it is held, may disturb the normal development of their mind. This is more so, as at this stage the students are apt to be emotional and excitable.

A number of studies have been done researching the effects of coeducation and single-sex education. For years, a question many educators, parents, and researchers have been asking is whether or not it is academically beneficial to teach boys and girls together or separately at school. Some argue that coeducation has primarily social benefits, allowing males and females of all ages to become more prepared for real-world situations, whereas a student that is only familiar with a single-sex setting could be less prepared, nervous, or uneasy.

However, certain authors argue that at certain ages, students may be more distracted by the opposite sex in a coeducational setting. This distraction may affect how often a student is willing to raise his or her hand in class and urge students to be less focused on the lesson. Girls may have lower, more traditional aspirations and may choose occupations that tend to be more traditional in nature as opposed to science-related occupations. According to advocates of coeducation, without classmates of the opposite sex, students have social issues that may impact adolescent development. They argue that the absence of the opposite sex creates an unrealistic environment not duplicated in the real world. Some studies show that in classes that are separated by gender, male and female students work and learn on the same level as their peers, the stereotypical mentality of the teacher is removed, and girls are likely to have more confidence in the classroom than they would in a coeducational class.

Educational program: The wireless or, radio can be used for educational purposes, besides entertainment. There is so much to be learned these days progress going on everywhere, in all departments of life, and all over the world. Indeed, it is difficult to remain thoroughly up-to-date in this fast-developing world.

The wireless or, radio station helps us in some measures to keep pace with this world of progress. The radio’ selects, condenses and gives us bits of important information. It has programs to suit all types of listeners of all age groups.

Conclusion: There is no educational system in the world that has eradicated the negatives of the society but a co-educational system can work towards mending the gap between the genders and building a bridge of friendship.

It is now expected that the Radio and TV would henceforward be more impartial in catering to the common people. In this promising era of empowerment, though the debate on coeducation is going on, it is very essential to have a co-education system to fit the survival of an environment where both the genders have their place.