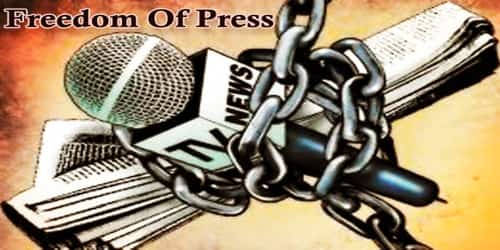 Essay On Freedom Of Press

Introduction: A press is the symbol of a free people. An independent well-informed press is a powerful check on arbitrary governments and irresponsible administrators.

‘Freedom of the press’ or ‘Freedom of the media’ is the principle that communication and expression through various media, including printed and electronic media, especially published materials, should be considered a right to be exercised freely. Such freedom implies the absence of interference from an overreaching state; its preservation may be sought through constitutional or other legal protections.

“Press freedom is the cornerstone of democratic societies. All States, all nations, are strengthened by information, debate and the exchange of opinions. At a time of growing discourse of mistrust and delegitimization of the press and journalism, it is essential that we guarantee freedom of opinion through the free exchange of ideas and information based on factual truths.”

— Audrey Azoulay, Director-General of UNESCO, on the occasion of ‘World Press Freedom Day’.

Freedom of the press is construed as an absence of interference by outside entities, such as a government or religious organization, rather than as a right for authors to have their works published by other people. This idea was famously summarized by the 20th-century American journalist, A. J. Liebling, who wrote, “Freedom of the press is guaranteed only to those who own one”. Freedom of the press gives the printer or publisher exclusive control over what the publisher chooses to publish, including the right to refuse to print anything for any reason.

If the freedom of the press is undervalued books written on religion, politics, sex, etc. may likely be prescribed. Personal art, doctrines, isms are not subject to any moral or immoral barrier. If this happens to them, they will remain at the bottom of people’s oblivion.

Reasons for the freedom of press: Newspapers and journals make a very good contribution to the nation and the land so that they may function well either effectively or efficiently. Hence they deserve freedom in their realm of work within specific ethics. As related and identified with newspapers, the press wields immense power in a democratic country.

Every year, 3rd May is a date which celebrates the fundamental principles of press freedom, to evaluate press freedom around the world, to defend the media from attacks on their independence and to pay tribute to journalists who have lost their lives in the exercise of their profession. World Press Freedom Day was proclaimed by the UN General Assembly in 1993 following a Recommendation adopted at the twenty-sixth session of UNESCO’s General Conference in 1991. This in turn was a response to a call by African journalists who in 1991 produced the landmark Windhoek Declaration on media pluralism and independence.

Real Freedom: Real freedom of the press can exist only where free people can function freely in a free democracy. It is saved right which should zealously be promoted. The Government owes it to itself to guarantee it from all arbitrary interferences. Editors owe it to the public to maintain an honest attitude in favor of the people against the party or class interest. In an enriched democratic govt. a newspaper is widely free like flying birds in the sky to express and spread public opinion.

Conclusion: Freedom of the press should be a valued privilege. The govt. should zealously come forward to encourage the newspaper to publish news and views in a free and fair way against any party and class interests.