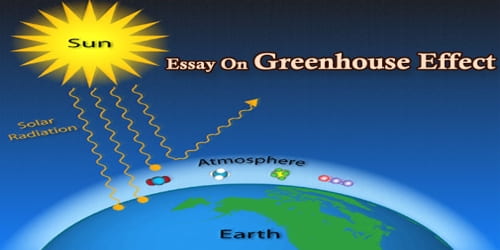 Introduction: ‘Greenhouse Effect’, a warming of Earth’s surface and troposphere (the lowest layer of the atmosphere) caused by the presence of water vapor, carbon dioxide, methane, and certain other gases in the air. Of those gases, known as greenhouse gases, water vapor has the largest effect. In the modern world energy and wealth are being used so excessively and for so many purposes that day by day the balance between various forces and elements of nature is being disrupted.

Consequently, everything in nature is running towards an inevitable side-effect called the ‘Green House Effect’. It is dangerous for living creatures on earth. The Advertisement and progress of science have some influences on nature which causes greenhouse effects. The greenhouse effect is the gradual warming of the air surrounding the earth as a result of heat being trapped by environmental pollution.

History of Greenhouse Effect: The existence of the greenhouse effect was argued for by French mathematician Joseph Fourier in 1824. The argument and the evidence were further strengthened by Claude Pouillet in 1827 and 1838 and reasoned from experimental observations by Eunice Newton Foote in 1856. John Tyndall expanded her work in 1859 by measuring radiative properties of a wider spectrum of greenhouse gases. The effect was more fully quantified by Swedish physicist and physical chemist Svante Arrhenius in 1896, who made the first quantitative prediction of global warming due to a hypothetical doubling of atmospheric carbon dioxide.

Arrhenius first refers to this “hot-house theory” of the atmosphere which would be known later as the greenhouse effect in his work Worlds in the Making (1903). However, the term “greenhouse” was not used to refer to this effect by any of these scientists; the term was first used in this way by Nils Gustaf Ekholm in 1901.

Causes of Greenhouse Effect: There are many causes of greenhouse effects. The destruction and burning down of the tropical forests, traffic clogging up the city streets, the rapid growth of unplanned industries, the use of CFCs in packaging and manufacturing products, the use of detergents etc cause greenhouse effects. Besides, overpopulation, pollution, deforestation, an increase in temperature, etc. are the causative factors of greenhouse effects. Overpopulation is a problem for any country. They need additional things for their survival. They need at least fundamental things food, clothes, houses, Medicare, education. To provide them with dwelling places need to make or build houses. Housing needs cutting off trees. It causes natural imbalance meant. The setting up of mills and factories in an unplanned way has a great effect on the environment. These mills and factories produce black smoke which gets mixed with air and pollutes it. These mills and factories also use Insecticides and powerful chemicals to manufacture goods. The main culprits of greenhouse effects are carbon-die-oxide produced by the burning of fossil and fuel and forests and pollutants such as methane and CFCs. For this the surface temperature/heat Increases from 1.5° to 5.5o and causes green-house effects.

By their percentage contribution to the greenhouse effect on Earth the four major gases are:

It is not possible to assign a specific percentage to each gas because the absorption and emission bands of the gases overlap (hence the ranges given above). Clouds also absorb and emit infrared radiation and thus affect the radiative properties of the atmosphere.

From the beginning of the Industrial Revolution through the end of the 20th century, the amount of carbon dioxide in the atmosphere increased by roughly 30 percent and the amount of methane more than doubled. A number of scientists have predicted that human-related increases in atmospheric carbon dioxide and other greenhouse gases could lead by the end of the 21st century to an increase in the global average temperature of 0.3 to 4.8 °C (0.5 to 8.6 °F) relative to the 1986-2005 average. This global warming could alter Earth’s climates and thereby produce new patterns and extremes of drought and rainfall and possibly disrupt food production in certain regions.

Mechanism of the Greenhouse Effect: Sun gives out UV, infrared and visible radiation gets received by the earth. The incoming solar energy from the sun is redirected back towards space by the atmosphere and clouds and then some of the solar energy gets absorbed by the atmosphere and clouds. And the remaining energy gets absorbed by the Earth’s surface making it warm. This energy then gets converted into heat.

Now once this heat gets absorbed by the earth’s surface, it is trapped in the earth’s atmosphere and thereby adding to increase the earth’s temperature. This effect is what we call the ‘Greenhouse Effect’.

Dangers of the Greenhouse Effect: The Greenhouse effect is very dangerous for our existence and survival. It causes a great change in the weather and climate. The sun’s scorching heat comes to earth in a direct way. The earth’s surface becomes seriously heated. There will be an increase in a violent storm. The rivers frequent floods that carry silent overflow their banks causing water to land and the land will lose it is alluvial and fertility. Agriculture, forestry, and fishery will seriously be damaged. Greenhouse effects make climate warm which causes sea-water to swell up. The sea-costs will be over flooded and the sufferings of people of those areas will be untold knowing no bounds. There will be less quantity of oxygen.

The Remedy of Greenhouse Effect: To prevent the dangerous effects of greenhouse necessary steps should immediately be taken. People should not be allowed to cut off trees which cause deforestation. Rather they will be advised and suggested to plant more and more trees in accordance with their capability and convenience. Campaign for tree plantation should be introduced and implemented. Forests also control the natural balance. People should be made aware of it. Mills, factories, brick-fields should be set up in a very good planned way. Silencer pipes should carefully be set to pass out polluted air, gas, bad smell and intolerable sounds. There should be a good drainage system to pass away waste materials, wastages, and poisonous chemicals.

Conclusion: The world’s climate will undergo a significant change; the temperatures will increase day by day for green-house effects. Unless green-house effecting causes are not controlled, no men, animals will be able to live, grow and thrive.