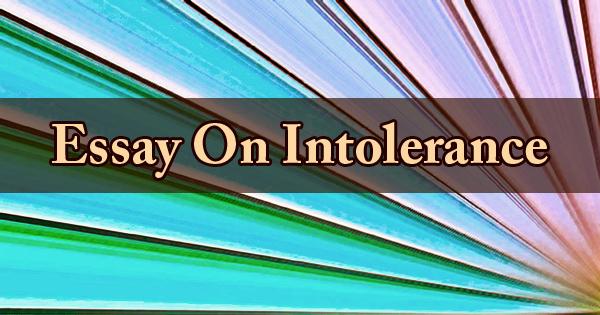 Introduction: Intolerance is a rejection of any views or belief systems relating to a person or community belonging to another caste, tradition, faith, and culture to embrace, value, and appreciate. Due to the economically depressed and politically charged situation among the individuals of different classes, the situation of intolerance will arise. In such situations, individuals find it difficult to accept others that differ from themselves. It hurts everybody severely and in particular the country. Narrow mindedness offers to ascend to wrongdoing, contempt towards brethren, and separation at a more profound level in the general public. In addition, it prevents a person from holding, adopting, or going with such beliefs, classes, or individuals who belong to another caste, creed, community, religion, or nationality.

The nation where narrow mindedness exists might be the home of segregation, suppression, dehumanization, and savagery. Intolerance forms the basis in society through gender, culture, caste, faith, or other unaccepted beliefs. Intolerance is therefore an act that gives a person the right to deny the mind or heart of another person.

Definition of Intolerance: Intolerance is typically a disorder in which people do not tolerate people of various faiths, castes, or communities other than their own practices or behaviors. It is the division of solidarity between the individuals of different classes that produce the state of dislike, rejection, and conflict. While, resilience acknowledges solidarity in variety (Bangladesh, India is the most appropriate model) and creates comprehension to live similarly. People grow the feeling of envy and then intolerance just because of simple things like someone in the eye of the most successful guy, cannot bear the significance of his/her near one.

Tolerance is the capacity of people to cultivate a positive attitude towards others of different religions, traditions, views, nationalities, customs, etc. Intolerant persons are unable to make the correct decision for others simply because of intolerance to hear someone else’s views. Narrow mindedness prompts the way of the devastation of an individual or a general public. Folklore and History are, by a wide margin, an extraordinary illustration of quite an offbeat demonstration.

Intolerant people cannot tolerate anyone else, which has been the primary problem all over the world since ancient history. Intolerance makes people very quickly angry and aggressive towards each other (people with different casts and religions) over something they do not accept in any situation. A well-rounded schooling framework and resilience make them ready to realize how to oversee their prejudice. The act of resilience can be drilled from the school time of children. They should be instructed to acknowledge contrasts in the general public.

Effects of Intolerance: Intolerance is the state of failure that motivates individuals to despise people’s behaviors, attitudes, and beliefs linked to another group. There is for instance, a high degree of intolerance between the Jews of Israel and the Palestinians. Intolerance in culture contributes to inter-group violence. Intolerance begins in a general public involving politically charged and financially discouraged gatherings, or people who endure separation, or mischief. Abuse, bigotry, dehumanization, or persecution of individuals arises in such situations. It subsequently results in a situation where two or more classes, caste, religion, cultures, and customs are permanently segregated.

Intolerance makes individuals bias and doesn’t offer an opportunity to thing certain about anything occurring in various manner in the general public or country. It has an elevated level annihilating limit and exceptionally risky for the country where it exists. Thus, it is smarter to prevent it from filling in any general public or nation as opposed to diminishing its rate. Intolerance narrows the mentality of a human. This prevents him/her from embracing any changes that might assist a society or a nation’s growth. Narrow-minded individuals have a significant level of ruinous force and put the whole country in question. Thusly, the demonstration of Intolerance should be forestalled in any nation, network, or society.

Intolerance in Society: Intolerance occurs for different purposes in society. In the culture that divides the country, religious intolerance usually emerges. Intolerance exists in nations that have diverse societies, practices, castes, beliefs, castes, and customs at home. Nonetheless, tolerant nations praise fairs and celebrations without the impedance of different gatherings and networks. Intolerance makes the state of battle by setting neighbors against neighbors. Due to the absence of their own experiences, intolerance can arise between individuals. In general, they express their views on assumptions that are very easily impacted by the positive or negative views of the nearest or most prominent ones in life.

Conclusion: Correspondence is another compelling arrangement component that destroys Intolerance, permitting individuals to communicate their inclinations and requirements. Intolerance should be debilitated and resistance should be energized among individuals. By using different approaches, tolerance can be encouraged. The intimate interaction between groups increases each other’s personal interactions and decreases intolerance. Intolerance between individuals, the media, and education is perpetuated. In fostering empathy, compassion, and all that is culturally sensitive, the media plays a vital role. In a culture. Another best way to facilitate peaceful co-existence and endurance in the country, society, or community is education.