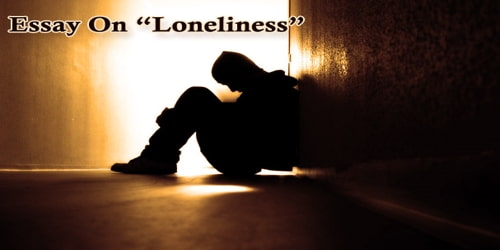 Introduction: Loneliness is a complex and usually unpleasant emotional response to isolation. It refers to a state of being alone. It is a moment when one feels sad because of being cut off from one’s near and dear ones either physically or psychologically. The extreme case of physical loneliness would be solitary confinement in a prison or being marooned on an island like Robinson Crusoe, Alexander Selkirk, etc. It has also been described as social pain a psychological mechanism meant to motivate an individual to seek social connections.

Loneliness is to be clearly distinguished from solitude as unlike the latter, it is always an unwelcomed feeling to which one is subject out of some external or inner compulsions. It is beyond one’s control whereas many persons would occasionally prefer enjoying solitude, far from the madding crowds.

Loneliness is often defined in terms of one’s connectedness to others, or more specifically as “the unpleasant experience that occurs when a person’s network of social relations is deficient in some important way”.

Grounds of Loneliness: Man faces an increasing incidence of loneliness because of the fast-changing social and economic conditions of modern times. It is a comparatively recent phenomenon: Close quite primitive groups bring out a precarious existence by hunting wild animals or eating wild fruits would not experience loneliness as they would always engage collectively in life-supporting activities.

Later settled agricultural communities were land-based and had a little occasion for feeling loneliness for the individuals who had strong ties with their families and village communities. They were alone neither in their joys nor in their sorrows as both the conditions brought them together for intensifying the joys and reducing the sorrow by sharing.

Loneliness can also be seen as a social phenomenon, capable of spreading like a disease. When one person in a group begins to feel lonely, this feeling can spread to others, increasing everybody’s risk for feelings of loneliness. People can feel lonely even when they are surrounded by other people.

Individual’s levels of loneliness typically remain more or less constant during adulthood until 75 to 80 years of age, when they increase somewhat. Prolonged loneliness is associated with depression, poor social support, neuroticism, and introversion. Studies have shown that loneliness puts people at risk for physical disease and that it may contribute to a shortened life span.

The Risks of Loneliness: Loneliness typically includes anxious feelings about a lack of connection or communication with other beings, both in the present and extending into the future. It can be a risk factor for heart disease, Type 2 diabetes, arthritis, among other critical diseases. Lonely people are also twice as likely to develop Alzheimer’s disease.

At the root, isolation compromises immunity increases the production of stress hormones and is harmful to sleep. All of this feeds chronic inflammation, which lowers immunity to the degree that lonely people even suffer more from the common cold. Loneliness can be a chronic stress condition that ages the body and causes damage to overall well-being.

Psychological Aspect: Loneliness may often grow out of some psychological compulsions. A person may suffer from an inferiority complex that he is unwanted or unloved. He/she will naturally avoid routine contact with others for fear of being repulsed or rebuffed. He/she will feel secure only when he is alone. He/she who cannot enjoy a company cannot enjoy real happiness which consists mostly of interaction with others or in getting appreciation or approval from others.

Conclusion: Loneliness is both pleasing and boring. It is correlated with social anxiety, social inhibition (shyness), sadness, hostility, distrust, and low self-esteem, characteristics that hamper one’s ability to interact in skillful and rewarding ways. Circumstantial loneliness causes no pains but forcide loneliness is bordom. But the person who has seen death from close quarters finds the true and real meaning of life. Similarly a person, who has undergone the experience of loneliness for a substantional time, keenly feels the joy of social interaction such a person realizes the true dimension of security and relaxation, one experiences in the company of one’s family members or dear friends. Experiences of loneliness strengthen social ties and convert even loners into social beings.