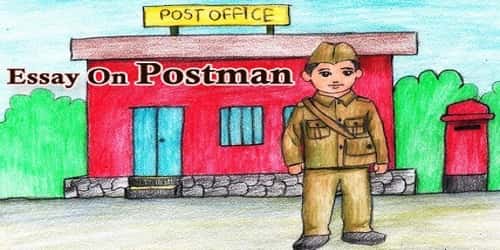 Introduction: In ancient times, people relied on pigeons to convey messages to their loved ones living in faraway lands. However, as things changed these were replaced by a more reliable medium. Post offices came into being and postmen were hired to deliver important letters, parcels, and documents. A postman is a community helper. He is as important to the society as other community helpers such as a doctor, a teacher, a policeman, and a vegetable-seller. He helps in connecting people by conveying their messages to each other.

A postman wears a khaki uniform and holds a bag full of letters on his shoulder. He rides a bicycle and roams around on streets to deliver letters to different addresses. He needs to make sure that every letter reaches the correct address. He also needs to ensure that the letters are delivered timely. Many people subscribe to magazines and newsletters. These are also delivered by the postman. He is reprimanded in case he doesn’t perform his duty well.

A postman rides a bicycle even in today’s times. People have upgraded from cycles to scooters to cars. However, postmen are still assigned bicycles. They roam around on this eco-friendly vehicle the entire day to distribute letters and other important documents to people.

A Tough Job: The job of a postman is not easy. He requires reporting to the post office early every morning. He collects all the letters from the post office and then sets out to distribute them in the area assigned to him. The letters need to be distributed at different addresses. He needs to look for the best possible route based on the addresses he needs to visit in order to complete his job by evening. He needs to ensure that the letters reach people on time so that they do not miss out on any important message. A postman cannot afford to miss any delivery or misplace any letter as he can be questioned for loss or delayed delivery. He can be punished in such cases. He can lose his job or a part of his salary in the event.

In the evening, the postman requires reporting to the post office again. In case, any job is left incomplete he requires completing it before heading home. It is sad, that even though a postman works hard all day long, he is not paid well by the government.

Many people in the village do not know how to read. So, in addition to distributing letters, the postman also takes it as his responsibility to read the letters to villagers. He does this job with joy. He sits down and patiently conveys the message written in the letter to the people. In case, there is some good news, people reward the postman to express and share their happiness.

The Importance of Postman in the Earlier Times and the Modern Times: A postman was one of the most important community helpers in the times when there were no phones. People communicated with their relatives and friends living in distant lands by way of handwritten letters that were delivered by postmen.

Since banks were not easily accessible and there were no ATMs, people often sent money orders. Gifts and other important parcels were also sent via post. A telegram was sent in case an urgent message had to be conveyed. The role of the postman was thus that of great responsibility in the past. People relied upon him for receiving money and important messages and things. They keenly waited for postman each day.

It would not be wrong to say that the importance of postman has lowered to some extent due to the introduction of phones and emails. Instead of writing long letters to each other, people send quick messages or emails to convey the message. They no longer have to wait for days to hear from each other. They can simply make a call or text their loved ones as well as business associates and connect with them instantly. All the banking transactions including the transfer of money and receiving of documents is also done online. People hardly spend money orders these days.

However, receiving handwritten letters is still a great feeling. The importance of postman may have reduced with time but he is still an essential part of our community. He still delivers many important posts such as university results, admission cards, weekly/monthly magazines, and the likes.

Conclusion: A postman has always been an important part of our society. We should be thankful to these professionals for carrying out their tasks with dedication.