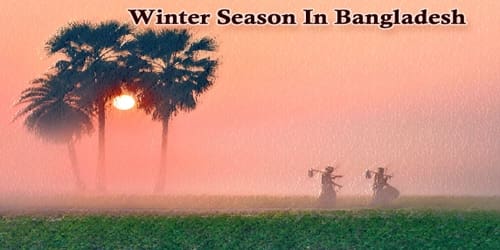 Essay On Winter Season In Bangladesh

In winter, the days are short and the nights are long. It is the coldest season. This season in the country cold air follows, sometimes temperature level decreasing up to 5°C to 8°C and generally an average temperature of here in winter is 15°C to 20°C. January is generally the coldest month of the season. Winter season is a very nice, enjoyable season, it is also a very dry season in Bangladesh.

Description: Bangladesh is a tropical country. So, winter here is comparatively, moderate than that in European countries. A stream of cold air flows eastward and enters Bangladesh through her north-west corner. The winter season is very dry in our country. It accounts for less than 4% of the total annual rainfall. The nights are longer than the days and January is the coldest month. In Bangladesh, the lowest temperature of winter was recorded in 1905 which was only 1o Celsius.

It is the season of mist and fog. The sun rises late and sets early. Even when the sun rises, it is a matter of good luck to see the face of the sun as it remains covered with dense fog. Mists begin to fall at night and disappear as the sun rises in the morning. The cold wind blows from the north. Most of the trees shed their leaves. Then they look like skeletons. Everything looks grey and hazy due to the dense fog. Everybody wears heavy clothes to ward off the cold.

Merits and Demerits of Winter Season: Winter is the season of abundance. A larger variety of vegetables, such as cauliflower, cabbage, potato, brinjal, tomato, etc. grows up abundantly in this season. Besides, the juice is extracted from dates and fruits also become prolific. During this time, people make payments and various kinds of delicious cakes. It is also a season for traveling. People go to different tourist spots to have vacations and picnics. In this season, the village roads remain dry. So, people go to visit their relatives in winter. An air of festivity prevails in the whole season.

Winter season is the most entertaining season in this country. In winter people here go to different beautiful places and arranges some festival for entertainment. This the best for traveling anywhere foresee its beauty.

It is a difficult season for the poor. For want of warm clothes, their life becomes miserable. They lit up the fire with straw and bask in the fire. In the morning people are also found sitting in the sun for warmth. Sometimes, cold waves hit. This season some problems also facing especially health-related problems about old men and children. Many people even die from a terrible cold.

Conclusion: Though winter is bare, dull and colorless to some people, we find a strange beauty in this season. The weather in winter is salubrious. A sound sleep under the heavy quilt in the long winter night is very enjoyable. So, I like this season very much.