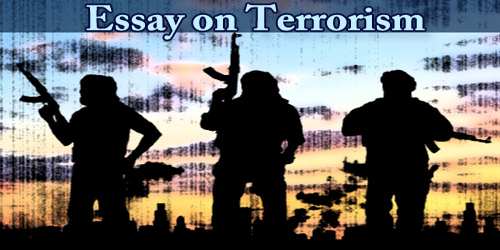 Introduction: Terrorism is often motivated by religious, political, or other ideological beliefs and committed in the pursuit of goals that are usually political. The word ‘Terrorism’ actually refers to the intentional acts of violence that leads to the harming and killing of innocent people and creating an atmosphere of fear in the society. The ultimate aim is to bring a political change using forceful attacks.

Common definitions of terrorism refer to violent acts which are intended to create fear (terror). They may be done for a religious, political, or ideological goal, and uses illegal violence. Some definitions now include acts of unlawful violence and war. The use of similar tactics by criminal gangs is not usually called terrorism. The same actions may be called terrorism when done by a politically motivated group. There are over 10000 definitions of “terrorism”. In some cases, the same group may be described as “freedom fighters” by its supporters and “terrorists” by its opponents. The term ‘terrorism’ is often used by states to criticize political opponents.

History of Terrorism: Terrorism has been around since history has been recorded, from biblical citations to the pattern of political terror surrounding Julius Caesar. However the first verified event to expose the politicized use of the term terror was “The Reign of Terror” coined during the French Revolution and directed at the French government for killing thousands of suspected enemies of the revolution (1793-1794).

Maximilien Robespierre was the government head in France during this period. This period saw the mass execution of people and was known as the Reign of terror. He believed that violence could bring in a better system. Long before the French revolution, brutal killings of traitors took place in Jerusalem, the Roman Empire, etc. Terrorism was a legal policy during the Nazi period in Germany. Under the rule of dictatorial leaders like Joseph Stalin, millions of citizens were killed in the Soviet Union.

Scholars of terrorism refer to four major waves of global terrorism: “the Anarchist, the Anti-Colonial, the New Left, and the Religious. The first three have been completed and lasted around 40 years; the fourth is now in its third decade.”

Nature of Terrorism: Today, terrorism is not a state-supported act. It is a lethal instrument to attack an existing political system. Terrorist groups have extreme nationalist fervor but engage in forms of attack that harm masses, and shake the public’s sense of security. They involve in hijackings, kidnappings, hostage-takings, and bombings. They plan their activities carefully and ensure that the number of casualties is high. The terrorist organizations try to brainwash people such that their fighters do not fear death. They have a strong feeling of fighting for the right cause, and they can do any harm to society. It is worse than guerrilla warfare. The guerrilla fighters aim at a military victory and do not rely on fear generation like terrorism.

Causes of Terrorism: Unfortunately, there are no physical characteristics that portray the image of a terrorist. In fact, there is no evidence to suggest that a terrorist fits into a specific economic level, family structure, or political status. More often than not, civilians end up with attachments to such extremist organizations due to extraneous circumstances. During conflict situations, when state institutions fail to provide basic human needs, such as security, food, shelter, and work, for its people, “power is diffused and exerted through informal or incoherent means”. When this happens, rebel groups, who have strong internal support networks, are the organizations that come in to pick the pieces. Extreme mistrust of a government can lead many civilians to join tribes and rebel factions, like Al Qaeda, in order seek out alternative means for basic human needs. Consequently, people suffering from deprivation more frequently turn to terrorist organizations.

There may not be a scientific explanation for what makes people turn to terrorism, nor is there an explanation for what makes people selfless or altruistic, but it appears that when individuals feel content and in control of their own lives they are more receptive to making less violent choices. Allowing citizens the availability of choices whether they are financial, political, or social will encourage a more fulfilling lifestyle. Therefore, confidence in democratic systems and empowerment of all people is perhaps the best answer to preventing terrorism.

Types of Terrorism: Depending on the country, the political system, and the time in history, the types of terrorism are varying.

International Terrorism – Revolt against the state and its ideologies existed in every part of the world. For instance, the Irish republican army wanted an independent status for Ireland. The Kurds in Turkey, Syria, Iran, and Iraq fought for autonomy of a Kurdish state. The battle of the LTTE group in Sri Lanka and the Sinhalese majority government was highly atrocious and led to large scale devastation. The terrorist groups gain ground when a few countries support and others oppose their movement of liberation. That is, a terrorist for one person becomes another person’s freedom fighter. State-sponsored terrorism could lead to wars among various countries. The hijackings of international flights, the killing of people in global events like the Olympics are a few tactics of the terror groups to jitter people across the world.

Political and Limited Political Terrorism – Violent criminal behavior designed primarily to generate fear in the community, or substantial segment of it, for political purposes. Genuine political terrorism is characterized by a revolutionary approach; limited political terrorism refers to “acts of terrorism which are committed for ideological or political motives but which are not part of a concerted campaign to capture control of the state”.

Eco/Bioterrorism and Religious Terrorism – Eco/Bioterrorism refers to the destruction of the environment. Threats and ideas to contaminate, deploy biological agents, and destroy energy sources like oil fields also fall under this category. Presently, this form of terrorism is declining among large terrorist groups but continues in the domestic circles.

Terrorism based on religion has become the norm of the day in the 21st century.  Several terrorist organizations like Al Qaeda, Hamas, and Hezbollah exist as extremist groups due to religious bias among the people. Religious terrorism is a menace for the progress of humanity. The attack on the twin towers was deadly and led to the policing role of the United States in the world. Leaders across the world have pledged to decimate these groups. Unfortunately, religion is one of the most significant causes of terrorism and often results in war.

Non-Political and Official or State Terrorism – Terrorism that is not aimed at political purposes but which exhibits “conscious design to create and maintain a high degree of fear for coercive purposes, but the end is an individual or collective gain rather than the achievement of a political objective”.

“Referring to nations whose rule is based upon fear and oppression that reach similar to terrorism or such proportions”. It may be referred to as Structural Terrorism defined broadly as terrorist acts carried out by governments in pursuit of political objectives, often as part of their foreign policy.

Conclusion: To solve the issue of terrorism, we not only require trained human resources but also a change in the mindset of the people. People are not born as terrorists; they are made one in the name of religion, ethnicity, and nationality. Mass media exposure may be a primary goal of those carrying out terrorism, to expose issues that would otherwise be ignored by the media. Some consider this to be the manipulation and exploitation of the media.