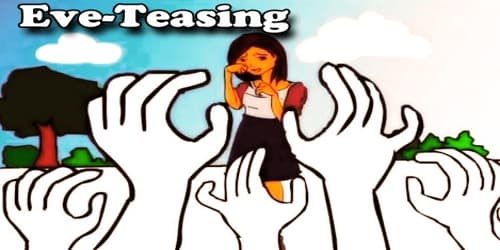 Eve-teasing is the act of annoying a woman or women in a public place by making sexual comments. It is now a constant happening in the lives of the girls and women of our country. Almost every young girl is a victim of teasing, especially by the local young teaser. Most of the people may avoid it as a common matter with the young generation. In fact, the whole Indian subcontinental neighborhood is harassed with this discomfort. That shows a certain sort of the wrong mindset of men who cherish no respect for women’s dignity. Eve-teasing is a shocking experience for women. It can leave deep psychological scars which can be hard to heal. Eve-teasing has resulted in many unfortunate events in the lives of women. Delusional parents concerned about the safety and honor of their daughters can literally ruin their future. Ironically, teasing has dangerous consequences for the woman and not for men as it can deprive them of their freedom, nutrition, and education. In the event of any incidence of Eve-teasing, the women, the victim is always blamed. It is as if males have got a license to indulge in any sort of lecherous behavior and can go away with it. The patriarchal nature of our society has not been able to deal with incidents of Eve-teasing in the right perspective. No one can explain the brunt of Eve-teasing and sexual harassment better than the female who has gone through it. The sufferers of Eve-teasing feel helplessness, anger, and frustration at not being able to do anything about the incident. In most cases, girls are getting married at an early age. This underage marriage problem is also increasing by this eve-teasing problem. The guardians assuming, their daughter will be safe and fine with her husband. Incidence of Eve-teasing permanently damages the psyche of the victims. It makes them suspicious about everything in life. Sexual harassment or other forms of molestations also affect personal and academic development of women. The experience leaves them bitter and cautious for the rest of their lives.