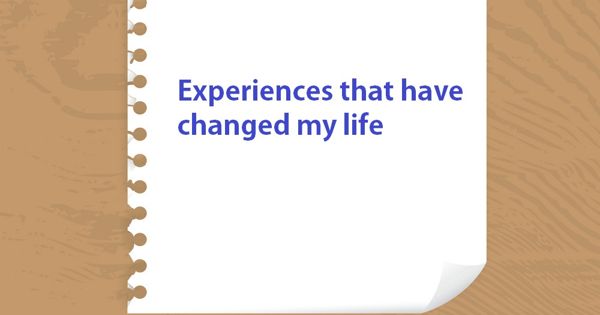 Experiences that have changed my life – an Open Speech

Life-changing experiences? After some hard consideration, three stand out. They have the most impact on me.

The happiest day of my life was my tenth birthday. All my friends had been up ‘Top Buz: It was a ride I had begged, pleaded and cajoled my mum to let me go. Her reply was, ‘You are too young to go alone. On my tenth birthday, my sister said she would accompany me. It was a great sacrifice on her part as Irin had a fear of heights. Looking down a three-storey building would make her retch. I was too giddy with happiness to realize what a great sacrifice my sister was making.

I screamed and screamed with excitement as we were thrown up and down, left and right, round and round. It was utterly exhilarating. I did not notice that my sister was utterly quiet. When the ride stopped, I turned round to see my sister rigid with terror. That experience stood out in two ways. One, I loved the ride. It started my love affair with all rides. Two, I will not forget that my sister would (and still does) do everything for me.

I was still as giddy when I was in the last year of primary school. I was impressed with a girl who claimed to be everything. I would hang at her every word and believe her utterly. One day Molly claimed that she just walked through the graveyard alone in the middle of the night. And that it was not the first time! Why just recently she … I was her slave.

The scales fell from my eyes when we were trapped in a lift. We both lived on the thirteenth floor. We were going home after tuition and I was listening to Molly, entranced when the lift gave a sudden jerk. It creaked and plunged. Then all at once, it stopped. The lights went off and we were in total darkness. Before I could utter a sound, I felt Molly clawing my arm. She was screaming hysterically. ‘I can’t breathe! There is no air! We are trapped!’ Molly began to wail and howl.

I was dumbstruck. Suddenly, the lights came on and the door opened. As I moved to the door, Molly pushed me away and dashed out of the lift. It was the most terrifying experience of my life. When the lift started falling, I could feel my hands going clammy and my heart hammering. I hate confined spaces. What was more frightening was Molly’s behavior. I could forgive her panicking at being trapped in the lift and that the stories of her courage were mere stories. I cannot forget how she shoved me out of the way to get to the door, or, that she boasted to the world afterward how cool and collected she was. I have since learned to be more discerning and not to be so gullible.

Recently I had a more traumatic experience that left me with nightmares. My cat was missing. I went around the apartment looking for Sheba. I could not find her. The whole family split up to go to look for her. She had been missing for three days.

I was downstairs, heading to the rubbish collection area when I thought I heard a faint mewing sound. I hurried over. There was a huge carton. I peered into it and saw some movement. ‘Sheba! You poor dear! Is it you?’

Then I saw it. Lying partially covered by the papers was a newborn infant. There were ants crawling over it. I quickly called my parents. Its eyes were closed. Was it dead?

By the time the police and the ambulance left, I was bawling. The baby had died. The poor baby. The poor mother! To have to abandon her child! Why? I kept asking the question.

These experiences have left an indelible mark on me. Life’s lessons have taught me to value my family and to be responsible for my actions.