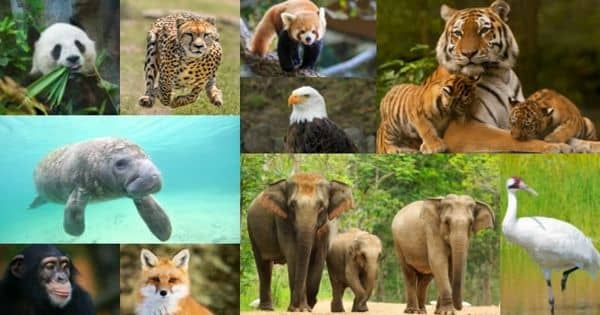 Over 34 000 plant species and 5200 animal species around the globe are threatened with extinction and many thousands more become extinct each year. The primary causes of species extinction or endangerment are habitat destruction, commercial exploitation such as plant collecting, hunting, and trade in animal parts. Of these causes, direct habitat destruction threatens most species.

Many types of human activity result in habitat destruction. As species evolve, they adapt to a specific habitat or environment that best meets their survival needs. Without this habitat, the species may not survive. Pollution, conversion of shrublands to grazing lands, cutting and clearing of forests, urbanization, road and dam construction have destroyed or seriously damaged available wildlife habitats.

Agriculture is another leading cause, with about 45 percent of the total land area in many countries used for farming. Besides replacing natural habitat with fields and plantations for the cultivation of crops, agricultural activity also results in soil erosion, pollution from pesticides and fertilizers.

As for urban development, it has destroyed wild habitat areas as well. Like agricultural activities, urbanization has led to the direct replacement of natural habitats. For instance, it causes the depletion of local resources such as water. Shortage of water is detrimental to the survival of many species. The cutting of forests for the clearance of land has destroyed many important habitats for numerous species.

Numerous other forms of human activity result in habitat destruction and degradation. These are grazing by domestic livestock reared by humans, mining activities that degrade habitats through pollution, and building dams.

Even human recreational activity, particularly the use of off road vehicles, results in the destruction of natural habitats.

Pollution is another important contributing cause of extinction. Water pollution and increased water temperatures have wiped out species of fish in many habitats. Oil spills contaminate the ocean floor for many years after the event. Acid rain, which is the toxic result of extreme air pollution, has been known to kill organisms in freshwater lakes and destroy large tracts of forested land.

The warming of the Earth can alter habitats drastically, with serious consequences for numerous species. It has caused expanses of evergreen forests located immediately south of the tundra to shrink. Another effect is the shifting of forests and grasslands towards more appropriate climate regimes. However, animal species cannot shift their ranges quickly enough, so they have no habitat to shift into.

The extinction of wildlife species is indeed a serious matter. Therefore, preventing it is of utmost importance.