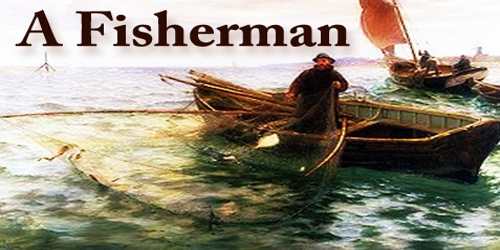 The man who catches fish to live is a fisherman. Generally a fisherman lives in a village near a river or a sea. Worldwide, there are about 38 million commercial and subsistence fishermen and fish farmers. Fishermen may be professional or recreational and may be both men or women. Fishing has existed as a means of obtaining food since the Mesolithic period. Fishing had become a major means of survival as well as a business venture. A fisherman is hard working and painstaking. He uses nets and boats in fishing. Some fishermen have nets but no boats. Some who have boats and nets employ the boat less ones and work in a group. Fishing and the fisherman have also influenced Ancient Egyptian religion; mullets were worshipped as a sign of the arriving flood season. Bastet was often manifested in the form of a catfish. In ancient Egyptian literature, the process that Amun used to create the world is associated with the tilapia’s method of mouth-brooding. A fisherman is always at work. While at home he repairs his boats or nets and he paints his boats or dyes his nets. He catches fish in the seas, rivers, and beels. His women-folk make new nets; his children dry fishes in the sun and sell them in the market. He works hard all day and night. The life of a fisherman is very risky and challenging because there may have storms and cyclones at any time. Some fishermen go to fish at night; some go to fish in the deep water or in the sea from home for many days. When he catches a lot of fish, his joy knows no bounds. After all a fisherman does much good to us by supplying fishes. In spite of being hard-working he can hardly make both ends meet. Government should take some steps for the development of a minimum standard of their livelihood.