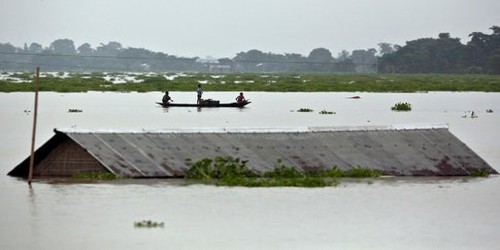 Flood a Natural Calamity in Bangladesh

Flood is a natural calamity. It is a relatively high flow of water that overtops the natural or artificial banks in any of the reaches of a stream. The unusual swelling of water that overflows the banks of the rivers and submerging a vast area of land is called flood. Floods are more or less of a recurring phenomenon in Bangladesh. Bangladesh, being a land of rivers, often falls victims to floods almost every year. Almost every year, she suffers from flood due to her geography.

There are several factors which cause a flood in Bangladesh. These may be classified into – (i) Natural causes and (ii) Artificial causes. Natural causes include the low topography of the country, heavy showers of rain, cyclones, tidal bores and melting of snow on mountains. It is devastating and horrible when causes a colossal loss to lives and properties. On the other hand, deforestation, the collapse of barrages and infrastructural lacunas are examples of artificial causes. The frequent occurrence of floods has thrown a great challenge on the smooth running of our national economy. 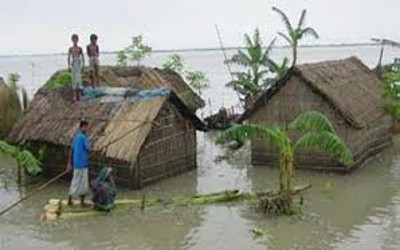 Bangladesh is one of the world’s least developed countries and prone to natural disasters, such as cyclones, floods, and droughts. Half of it is less than five meters above sea level. The havoc did by flood beggars description. It causes a heavy loss to our life, property, and crops. It sweeps over villages, roads, and fields. Each year about 18% of the country is flooded. During severe floods, the affected area may exceed 55% of the total area of the country. Flood washes away cattle and even people’s houses. Many human lives are lost, crops are damaged and trees are uprooted. Many dangerous diseases like cholera, typhoid, dysentery, etc. Break out in an epidemic form. All the communication system is suspended. People become homeless and they take shelter on high roads, schools, and colleges.

The History of floods in Bangladesh is inseparable from the history of this land. Every century she witnesses the visit of a large number of intense floods. Among these, the floods of 1955, 1963, 1974, 1987, 1988, 1998 and 2004 were the most devastating. We are unfortunate that Bangladesh falls a victim to floods almost 1988 and 1998, as the most terrible in all respects. The flood of 1998 broke all the records of the past. The after-effects of the flood are more dangerous. Famine breaks out in the flood-affected areas. Many waterborne diseases like cholera, dysentery, etc. break out in an epidemic form. There is a scarcity of drinking water. The price of all daily necessaries goes up.

Flood causes a huge loss to our country every year. Floods do a little good to man. It washes away the waste and filth. Though, Burring floods our rivers carry a lot of silts which make our soil fertile. As a result, many kinds of crops grow in plenty. Floods also wash away waste materials. So we must find out effective and permanent measures for the prevention of flood. The sooner the flood is controlled, the better-the better for a happier, healthier and wealthier life. It is a matter of hope that the Govt. has already taken a number of measures to minimize the loss of floods.