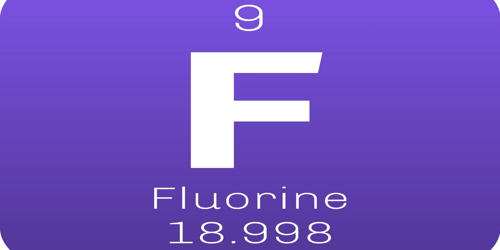 Fluorine is a chemical element with the symbol F and atomic number 9. It is the most reactive chemical element and the lightest member of the halogen elements, or Group 17 (Group VIIa) of the periodic table. It is the lightest halogen and exists as a highly toxic pale yellow diatomic gas at standard conditions. At room temperature, it is a faintly yellow gas with an irritating odor. Its chemical activity can be attributed to its extreme ability to attract electrons and to the small size of its atoms. As the most electronegative element, it is extremely reactive, as it reacts with all other elements, except for argon, neon, and helium. It reacts with most compounds, often violently. For example, when mixed with water, it reacts explosively. For these reasons, it must be handled with extreme care in the laboratory.

Among the elements, fluorine ranks 24th in universal abundance and 13th in terrestrial abundance. Fluorine is found in nature only in the form of its chemical compounds, except for trace amounts of the free element in fluorspar that has been subjected to radiation from radium. Fluorine is a pale yellow gas with a density of 1.695 grams per liter. That makes fluorine about 1.3 times as dense as air. Fluorine changes from a gas to a liquid at a temperature of -188.13°C (-306.5°F) and from a liquid to a solid at -219.61°C (-363.30°F).

Fluorine was discovered in 1886 by French chemist Henri Moissan (1852-1907). Moissan collected the gas by passing an electric current through one of its compounds, hydrogen fluoride (H2F2). Fluorite, the primary mineral source of fluorine which gave the element its name, was first described in 1529; as it was added to metal ores to lower their melting points for smelting, the Latin verb fluo meaning “flow” gave the mineral its name.

Proposed as an element in 1810, fluorine proved difficult and dangerous to separate from its compounds, and several early experimenters died or sustained injuries from their attempts. Only in 1886 did French chemist Henri Moissan isolate elemental fluorine using low-temperature electrolysis, a process still employed for modern production. Now, fluorine is used in many fluorochemicals, including solvents and high-temperature plastics, such as Teflon (poly(tetrafluoroethylene), PTFE). Teflon is well known for its non-stick properties and is used in frying pans. There are many applications of fluorine: