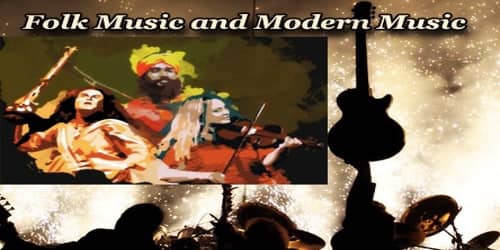 Music is an integral part of human culture and civilization. It always undergoes a dynamic process of evolution. Music can be classified into two types: Folk music and Modern music. Folk music comprises songs and music of a community which is uninfluenced by any sophisticated musical rules or any standard music styles. On the other hand, modern music means songs and music composed by highly educated people, sung with sophisticated musical rules and modern musical instruments. Folk music is a spontaneous expression in easy language, a local dialect, and a simple tune. It is composed and performed by illiterate or semi-illiterate people. It is an explicit manifestation of the joys and sorrows of daily life. It uses simple and natural rhythms and it contains a strong emotive expression of human love and separation. On the other hand, modern music is the cultural expression of highly sophisticated people who follow classical or most sophisticated rules and tunes. Modern music is always being modified and refined. It uses rather complex and mixed rhythms. It shows great artistic skills and performance. In the field of folk music, an old musical instrument such as harmonium, aktara, drum, flute, violin, etc. are used while modern music is sung with modern and sophisticated musical instruments such as the keyboard, piano, drum, guitar, mandolin, etc. Modern music is gradually becoming more and more popular with educated young people for some reasons. Firstly, in the era of globalization, people are getting exposed to various musical cultures of the world. As such modern music is being fused with sophisticated tunes taken from various countries, resulting in being more appealing and sophisticated. Secondly, highly educated and trained people working on modern music, it is getting more attractive and enchanting. Moreover, modern musical instruments enhance its appeal greatly.