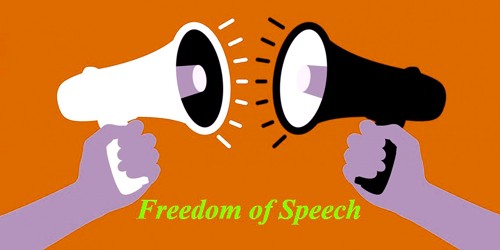 Freedom of speech is necessary for a free society. It allows the citizens of the country to express their ideas and share their opinions freely. It forms the basis of democracy. Most importantly, everyone has the right to think and act without causing harm or authority of any other individual.

Freedom is the most fundamental duty of every person in the world. In a free society, there is a democracy. In such a society Govt. is elected through people’s votes. People elect representatives to govern the country. Laws are made by the people’s representatives which means that people take part in the formulation of laws of the country. In a free society, nobody is persecuted illegally. Everyone has a say, so it is very difficult for anybody to torture others. Also, individuals feel safe and valuable in a free country. In such a country, trying to remove or reduce this democratic right can cause protest and even riots. It enables the people residing in those countries to speak their mind without the fear of being punished by the law.

The concept of freedom of speech originated long back. England’s Bill of Rights 1689 adopted freedom of speech as a constitutional right and it is still in effect. Article 19 of the Universal Declaration of Human Rights (UDHR) states: “Everyone has the right to freedom of opinion and expression; this right includes freedom to hold opinions without interference and to seek, receive and impart information and ideas through any media and regardless of frontiers.” The Universal Declaration of Human Rights that was adopted in the year 1948 also states that everyone should have the freedom to express their ideas and opinions.

Mass media is the best instrument for society to exercise its right to freedom of expression. However, the same society can enjoy the freedom of speech and expression and at the same time can infringe this right. So, another issue arises: where are the limits of freedom of speech?

In short, in a free society, people exercise freedom of speech, but they should be sensible enough to exercise this right. Freedom of speech must accompany responsibility and due respect to other peoples’ right and opinions. As people in free societies have differences in opinions, it is the duty of policymakers to keep the people informed and up to date when making decisions on their behalf.