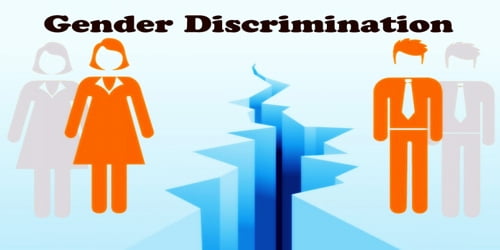 Gender discrimination means discriminatory treatment against the female. It begins with the birth of the female child. The worst sufferers are the divorced women and widows. The main reason for this degrading situation is that the women are not wage-earners and they have to depend on the male members of the family for their livelihood. The other reasons lie in the familial and social attitudes. The parents think that the female child will go away into another family as a wife in due course of time and will not contribute anything to the family welfare. The society considers women to be weaker in strength and wisdom. So, they face discrimination in the spheres of employment and career building. The society also thinks that their duty is to do household chores and rear up children. So they not allowed to go out of home and are not given the light of education. As such they cannot develop a strong personality and are not associated with decision making. Domestic violence incidents in Bangladesh are widespread and fairly common, affecting women across all forms of economic strata. While largely under-reported due to social stigma and fear, data suggests an increase in reported cases of abuse. A female child is welcomed in the family with disaffection because she regarded as nothing more than a burden and a liability. This problem of gender discrimination can be solved by creating general awareness among the people about the talents and importance of the female and removing social superstition prevailing against them. When women will be properly educated, they will be in a position to prove their worth and then the unmerited discrimination against them will automatically vanish. Gender inequality has been improving a lot in Bangladesh, inequalities in areas such as education and employment remain ongoing problems but women have great political freedom.