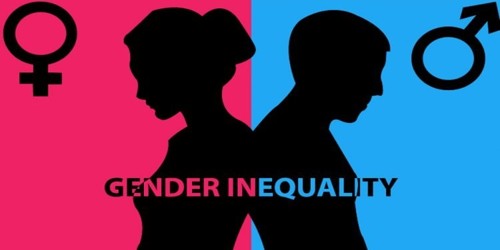 Gender Inequality refers to the discriminatory behavior of the society towards women. The problem of inequality in
employment being one of the most pressing issues today. This discrimination can be in the form of unequal rights, status or opportunities. Historically, women have remained marginalized and oppressed due to the patriarchal trends that had prevailed in every culture. The society in which we live has been shaped historically by
males. The population of women in our country is greater than men but even then people do not educate the females and they are not given the freedom to grow. This results in very major problems. Man and woman are both the creation of the same God, yet women are still considered down-trodden second-class citizens in many cultures.

A large portion of our country’s population is uneducated which results in high illiteracy rate and unemployment of females due to lack of education. In addition to this, if a woman is not educated it means that a whole generate is left uneducated, our future is left uneducated. This is not the only drawback of gender disparity but women are also suppressed and even tortured if they wish for going to schools or work on their future. These kind of illegal acts are more common in rural areas as the men over there are also not very liberal or highly educated. The opinions and problems of grassroots women need to be addressed.

Gender unequal practices in workplaces are still rampant. The governments must educate the individuals to shun all the social and cultural practices that pull the society behind. The west has already made a huge progress in every walk of life, and if the trends of gender inequality remained existing, the East would never be able to compete with them. It’s high time that every industry, company, and enterprise pay equally for equal work. Gender inequality is a serious issue and demands utmost sincerity from the leaders, governments and society. One of the key barriers is a mindset that limits what girls can achieve. It would be very helpful if young girls have role models to look up to.

However, there is no problem in the world which has no solution and just like this gender disparity is also not a problem without a solution. It surely can also be solved and minimized. Apart from the government, NGOs and activists have a crucial role to play in educating the public. The government should start a campaign in every region of the country, especially the urban areas. Most importantly, include more women in decision-making. Policies, schemes, and government facilities are for the entire population. Fathers should be told to give their daughters enough freedom to get an education. Husbands should be taught that it is not wrong if their wives wish to continue their education or want to pursue a career. Mothers should be taught to support their daughter and save them from dependency on any man. We need to take measures to build the confidence of girls in tech-related subjects.