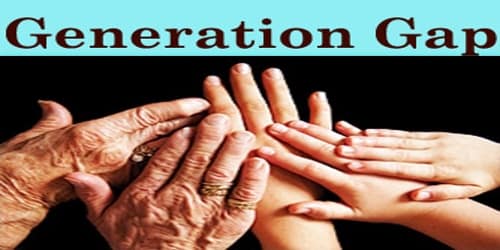 Introduction: Generation Gap is referred to as the difference of beliefs and ideas between people from different generations. This is a common phenomenon and has continued for ages. The term is often used to state the difference of opinions between children and parents or grandparents.

Origin of the Term of Generation Gap: The theory of generation gap was introduced in the year 1960s. Around this time it was observed that the younger generation questioned and went against almost everything their parents believed. This included their religious beliefs, political views, moral values, relationship advice and even the type of music and shows they prefer. Noted sociologists such as Karl Mannheim observed the differences across generations and how generations separated themselves from each other in different situations.

Classification of Generations: It has been observed that people from different generations behave differently in any given situation. Based on their point of view, beliefs, ideas, and overall behavior generations have been classified into different categories; they are – The Traditionalists, The Baby Boomers, The Generation X Group, and The Generation Y Group.

An Interesting Concept of Generation Gap: While the generation gap is usually a cause of conflict between the children and their parents, it is actually an interesting concept. The world would have actually been quite dull if it had not been for this gap. Each generation sets its own fashion trends, introduces its own slangs, influences the development of science and technology and comes up with fresh ideas and so on.

The generation gap has led to several changes in the society especially in India where the joint family system was prevalent since ages. The concept of nuclear families has been introduced in India off late and this is also a result of the generation gap. People these days crave for privacy and want to lead their life their own way and the joint family system is a hindrance to it. Many people are thus going for nuclear families. Similarly, many changes happening at various levels in society are a result of the generation gap.

Conclusion: As is the case with almost everything/concept on earth, generation gap also has its own sets of pros and cons. There is a need for developing understanding and acceptance in order to bridge this gap.